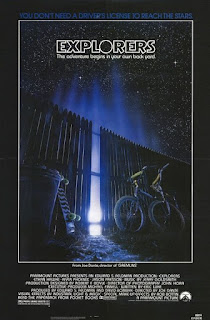 Close Encounters of the Third Kind and E.T. may be the most obvious sources of inspiration for J.J. Abrams new film Super 8. But there is another movie that shares the many of the same sensibilities and sense of wonder, Joe Dante’s Explorers.
Jason Pressmon, a young Ethan Hawke, and the late River Phoenix give wonderful natural performances as three young boys who literally build there own spaceship to travel and meet the aliens who have been communicating with them in dreams. In many ways the plot is sort of a Contact with kids.

The age of the kids in the movie, as well as their geeky pop culture personalities, are similar to those in Super 8. There is even an "it" girl. Although the character is nowhere near as developed Elle Fanning’s in Super 8, Amanda Peterson does a fine job. Two years later she would go on to star in 1987's terrific teen romance comedy Can’t Buy Me Love.

Explorers shares the same sense of wonder as Super 8. But where as the Super 8 finale is pure Spielberg, the final act of Explorers is all Joe Dante at his most irreverent off center best.

One area where Explorers does top Super 8 is the soundtrack. Michael Giacchino creates some nice musical moments in Super 8 and it is a great score. But Jerry Goldsmith’s soaring music in Explorers is a shimmering work of orchestral and eletronic wonder.  It literally lifts the film to a whole new level of emotional resonance and imagination.

Explorers was rushed into theaters July 12, 1985 with little fanfare from the Paramount and was met with mixed reviews and box office indifference. It was same some summer that the far inferior The Goonies was cleaning up at the box office and getting inexplicably good reviews.

Today Explorers has a cult following among Joe Dante fans.