For the World is Hollow and I Have Touched the Sky

A chapter from the femme fatale science fiction thriller She. 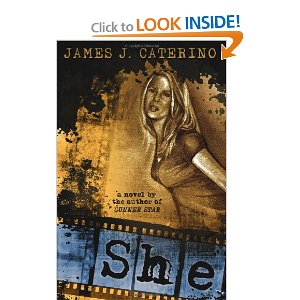 The found footage of She changed everything. It sped up the process. It propelled me further along. I was on the verge of something—something fantastic, some thing wonderful.

I spent the next several days indulging myself in a surreal state of gyrating imagery. The lines around me were beginning to blur. I thought about Troy Matheson. I thought about Rob Snow. Who was right—the crackpot dreamer or the cynical pragmatist?

I thought about time travel. What would it take to get back
there, to find her?

I wondered which reality was more “real,” the one around
me, or the addictive worlds of projected celluloid I created in the sanctity of the chamber. I began wandering though my daily routine in such a semi-conscious, twilight state of mind that I often lost track of where I was and what I was doing.

“What the hell gives?” Kelly snapped during one of our routine I.C. Light beer commercial shoots.
She shoved the daily shot list in front of me to snap me out
of my daze.

Kelly was not amused by my escalating metal state of intense
preoccupation. She could sense my wavering stability. She had a flawlessly logical mind. No doubt, she would deduce that I had now become intensely focused on something other than the day-to-day operations of Super 8 Images.

And no doubt she would see it as an unacceptable threat to
the carefully cultivated and delicately structured life of suburban family bliss she had procured for herself.

“You need to spend more time interacting with real people
instead of video monitors and projected make believe,” Kelly
would preach as she scolded me.

Kelly was right, of course, from a practical and realistic viewpoint. But that was a viewpoint to which I no longer could relate. I had neither the means nor even the desire to access it. My foray into filmmaking was a means to an end. It was a way to acquire a certain set of skills necessary for my journey, skills that I had long ago mastered and was now putting to a more practical use in the chamber.

It was all about the search for She.

I existed on a different mental plane now, closer to Troy
Matheson’s world of lucid photons and free-flowing energy than I had ever been before. I was sur rounded by a mental carousal of self-created imagery, a soothing kaleidoscope of lurid, colorful worlds of wonder to which I had become addicted.

I rarely slept. Even my regimented routine of six small meals a day had
become a haphazard diet of protein bars, apples, and even Nestle Crunch bars wolfed down quickly so that I could return to the task at hand.

Maybe if I spent enough time with the imagery of She, then
perhaps I could bring her to me. Maybe I could literally try to will her existence into my life. Such were the thoughts of my manic imagination.

“Cousin, sometimes I think you’ve seen one movie too many,” Harlan would often say to me.

I found myself losing track of all time and space as I spent
endless hours in the Anti-Reality Chamber, gorging myself on
the stimulation of flesh and celluloid, living vicariously in the projected alternate universes I had helped create.

In the increasingly difficult to navigate “real” world, I felt disconnected. I felt numb.

I was lost, hopelessly adrift, and felt ill-equipped to function in a mundane world that was drowning in the frenetic pace and angst of its own hyper-ambitions. Only when I returned to the sanctity of the Anti-Reality Chamber was I able to get my bearings. Only there, in the isolation of my self-created cinema, did I not feel alone. Only there, surrounded by wall-sized projections of glorious escape, was I once again able to feel.
It was only there that I felt in touch with something greater than myself, a hand of fate making itself known, making me aware that I was not alone. Fate was there to guide me. It was all part of the plan.

I had a purpose. I had a quest. I had a destiny. I just needed to stay strong and see it all though to the end.


Read more about the search for She and journey back into the dark secrets of a forbidden past. 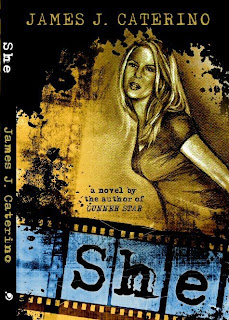