Beware of the Beast Man There has always been much more to the Planet of the Apes series than the over the top quotable dialogue, iconic SF imagery, and increasingly exploitive and cheesy sequels (not to mention Tim Burton’s despised 2001 remake) would indicate.

Dig below the surface, particularly in the scripts written by Paul Dehn, and you will find a subversive subtext about the inherently cruel and destructive nature of man, and why the human race is not deserving of this planet.

The new Rise of the Planet of the Apes takes its cue from the origin story sequel of the original series, Conquest of the Planet of the Apes. Conquest was a low budget exploitation movie. It was a dark, violent piece of brooding science fiction. Rise is a different beast all together. Caesar is not the offspring of talking apes who time traveled back from the future in a space ship.

There is no science fiction in Rise. It takes place in the real world with real life scenarios and the apes in this movie are as real as the ones at your local zoo. And it will make you think about how those creatures are being treated. And how did they get there in the first place. Not to mention the innocent victims at the local lab being who spend their lives being tortured and tested. After all, how would you feel if you were abducted from you home and forced to live the rest of your life alone in a cage being poked and prodded.

If only there were a Caesar in real life.

Sometime soon the Academy needs to create a category for Best Performance by an Actor in a motion control role. Andy Serkis gives a mesmerizing and heartbreaking performance as Caesar.
Serkis, together with Weta’s seamless SFX, Amanda Silver’s and Rick Jaffa’s economical screenplay and Rupert Wyatt’s tight direction, they have created a new and sensational character.

There are moments in this film where you will want to leap out of your seat to aide Caesar and strike back at his human tormentors.

A word needs to be said about James Franco. He may be a lousy Oscar host, but is a fine actor. He is beautifully understated here. His relationship with Caesar and the family and home he creates for them are truly special to watch unfold in the film's terrific first act.

Director Rupert Wyatt is spot on with his shot selection and Thor composer Patrick Doyle delivers his second knockout score of the summer.

There are only two dishonest moments in this film. It is when there is an homage paid to the original film. They are forced and cheesy lines, but thankfully brief. This is an emotionally pitch perfect movie that does not need to resort to fanboy suckups.

Yes, there is action in Rise, including a spectacular final battle filmed on location on the Golden Gate Bridge.

But most of all, this is a character driven film. The relationship that develops between Will and Caesar is truly something special. It is pure movie magic. This is a film that resonates with deep emotion. It has heart and a lead character that will stay with you long after the credits have stopped rolling.

Rise of the Planet of the Apes is a deeply affecting work of popular art and the best film of 2011 so far. 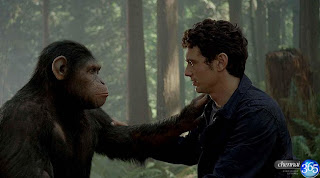