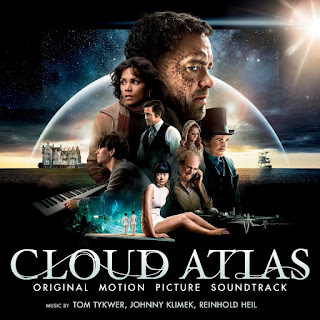 “Cloud Atlas” is a bold, visionary film adapted from the award winning 2004 novel by David Mitchell. To say that the story is sweeping would be an understatement. The scope of “Cloud Atlas” covers a multitude of historical eras and settings both past and present, all of them interconnected by unforgettable characters and bold philosophical statements.
Such a story and such a film require a monumental musical score if the groundbreaking ambitions of the filmmakers are to be full realized. “Cloud Atlas” has such a score. Like the film, it is a remarkable achievement.
When the “Matrix” directing team decided to embark on their bold creative journey and bring “Cloud Atlas” to the screen, the brought on board “Run Lola Run” director Tom Tykwer to co-direct. It was move that paid off in spades musically because as part of the package Tykwer helped to create the soundtrack for “Cloud Atlas” along with his “Run Lola Run” composers Reinhold Heil and Johnny Klimek.
A seamless blend of classical homages, orchestral film music, and electronic and techno influences mixed in with various international, ethnic and native influences, “Cloud Atlas” is one of the most eclectic soundtracks you will ever come across. Eclectic and yet shockingly cohesive because all of it is anchored around a sumptuous, fluid, flexible, and emotion packed main theme that can only be described as absolutely gorgeous.
The opening cue of the soundtrack “Prelude: The Atlas March” gives a gentle and haunting introduction to the main theme played on the piano and backed by strings. It sets the emotional timber of the score drawing the listener in with an emotional immediacy that continues to resonate throughout each and every track of this amazing soundtrack.

In track two “Cloud Atlas Opening Title” we get a sweeping variation of this flexible main theme that starts out in minimalistic fashion with a quick-tempo electronic harp rendition of the melody before building into a full on orchestral thrust that conveys the expansive scope of the story. Another creative variation with a Stravinsky flavor follows in “”Travel To Edinburgh” before transitioning into the modernistic concert-style cue “Luisia’a Birthmark”.
The same mode of astonishing creative composing continues throughout the entire soundtrack including the rousing action cue “The Escape” and the heartbreaking “All Boundaries Are Conventions”, a piece of music that will shake your soul to the core.
This is not a soundtrack you just listen to. This is deeply affecting, profound music that will make you feel things you may not have even knew existed inside you. This is movie scoring at its absolute pinnacle.
“Cloud Atlas” ranks alongside John Williams' “Lincoln” and Michael Giacchino’s “John Carter” as the best soundtrack of the year.
Suggested by the author: