Brian De Palma is a gifted master visual artist who has always had tremendous musical instincts. No other living American filmmaker has made better use of music in his films. Only the Italian stalk and slash maestro Dario Argento is in the same league as De Palma when it comes to creating the ultimate match of image and music. 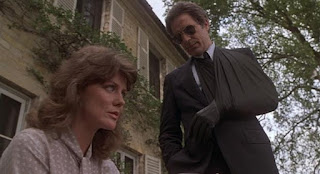 De Palma has worked with a variety of talented composers throughout his career, including the great Bernard Herrmann, the composer of his idol Hitchcock. One of the most fascinating collaborations of De Palma’s career was the one and only time he hooked up with the master composer of another film music oriented director, Steven Spielberg.

Classic De Palma slo-mo scene scored by John Williams
And of course that composer was John Williams and the result was "The Fury" (1978), a brooding masterpiece of symphonic scares that ranks as one of the most entertaining soundtracks in the storied career of the most popular film composer of all time.
There can no doubt that had De Palma’s career overlapped more with Bernard Herrmann’s, he would have forged a continuous partnership in much the same way Spielberg did with Williams. De Palma’s sinister and sexual sensibilities and his love of over the top melodrama and explosive violence found a perfect match with Herrmann’s music in the shocker "Sisters" (1974) and the "Vertigo" homage "Obsession" (1976).
But after Herrmann’s passing De Palma went to his friend Spielberg (and "The Fury" lead actress Amy Irving’s boyfriend) and called upon the services of John Williams. While Williams does pay the required homage by creating a moody score similar mode to what Hermann might have done, at the same time it is uniquely a John William's score. The music draws upon all things Williams, even his avant-garde music for "Lost in Space" to create the other worldly suspense and scares the picture required. 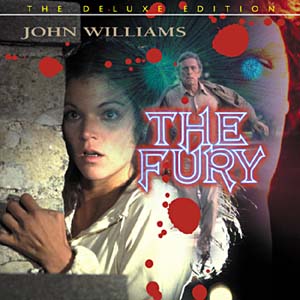 The soundtrack opens with "Main Title", a strong statement of the main theme, a brooding, baroque, almost waltz-like spooky theme that anchors the score and is brought back in with a variety of statements throughout the score. Williams always has been a master of using his thematic material at just the right moment, drawing the listener (and viewer) in to the story of sonic color he creates with his baton.

"The Fury" is a rich and varied score that shows off all sides of William's supernatural composing skills; there is somber mood music, the quiet buildup of suspense, explosive action cues, and the moving "Hester’s Theme". Even in a horror score John Williams can create deep sentiment.
But where the score really kicks in is track 13, "Descent", a hypnotic, lyrical, sensuous, dreamy, fluid sequence of brooding sonic delight the carries the listener on an irresistible journey into a world of dark wonders only hinted at by the on-screen paranormal mayhem in the film itself.
In the remainder of the back half of the soundtrack album, Williams continues to build musical momentum and lure us into his symphony of sensual suspense, until finally, he pulls out all stops and unleashes a cacophony of over the top orgasmic delight in the staggering brilliance of "Gillian’s Power" before transitioning into a  powerful restating of the main theme in "End Credits".
The original soundtrack to "The Fury" is available in a Deluxe edition released by Varese in 2002 which includes an extra disc of the score highlights re-recorded for an album in 1978 by John Williams and London Symphony Orchestra. 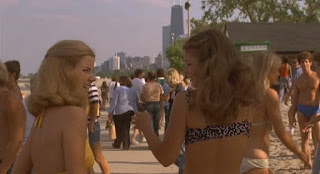