It knows what scares you

1982 was the closest thing to utopia on earth. If you are a genre movie fan of a certain age then you know exactly what I mean. It seemed every week another must see film opened up in theaters promising and delivering, a dramatic escape into imaginative storytelling and innovative commercial film-making of the highest order.
Many these films have stood the test of time and are now regarded as classics including, "E.T.", "Blade Runner", "Tron", "Star Trek II: The Wrath of of Kahn", and the Steven Spielberg produced Tobe Hooper directed "Poltergeist". 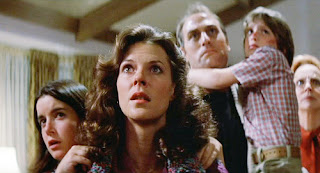 Of course, Spielberg's  involvement as producer (and co-writer) of "Poltergeist" went far beyond that of the later 80s Spielberg "lite" productions bearing the Amblin Entertainment moniker. Regardless of who was signed in on the daily logs as director on the set, there is no doubt every frame of "Poltergeist" bleeds with the Spielberg auteur stamp of God-light, suburban scares, and wonderment. The only exception to this is the ending. It lacks the upbeat resolution mandate that is present in every post "The Sugarland Express" pre-"Schindler's List" Spielberg directed film with the notable exception of his neglected 1987 masterpiece "Empire of he Sun".  In "Poltergeist" there is no return to the suburban bliss seen in the opening credits. It is a true horror ending and feels very much Tobe Hooper directed. 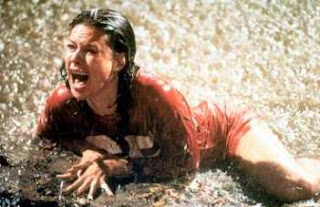 "Poltergeist" is one the big three of Spielberg's suburban trilogy, along with "Close Encounters of the Third Kind" (1978) and "E.T." (1982). All three films are spot on, realistic, detailed, fetishistic portrayals of consumerism in American suburban life of late 20th century America. It is both a homage and a sly satire.

But it is "Poltergeist", which takes issues with the newly embraced Reagonomics philosophy of "greed is good", where the satiric tone is most acerbic and substantial. Even the endless homages to "Star Wars" feel more like a parody of the absurd level movie merchandising, a brilliant self-swipe at both the bearded one's newly minted mogul status and his best friend George Lucas's empire, the man who invented the modern concept of movie-tie in consumerism.
One aspect of "Poltergeist" that is pure Spielberg by any measure is the use of music. The film music fan/director had John Williams busy creating an operatic masterwork to "E.T.", so for "Poltergeist" he turned to the composer Williams admitted to being a fan of, the legendary Jerry Goldsmith. 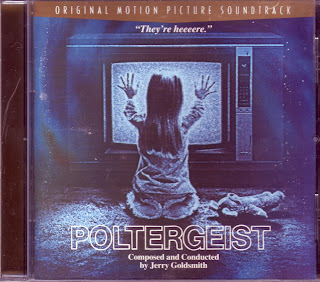 The "Poltergeist" soundtrack stands out as one of the most complete, varied, complex, muscular and entertaining works composed by Goldsmith at the peak of his great orchestral might.
It is staggering how effectively the music of "Poltergeist" paints a sonic portrait of the world beyond. It is music the grabs us by the heart and the gut, and like the dark spirit keeping the abducted Carol Anne close by, it calls to us and lures us in. Then it catapults us headlong "into the light", taking us on a dazzling journey of terror and wonder.

This is music that does indeed know how to scare you.

The most famous piece of music is the beautiful lullaby-like "Carol Anne’s Theme",  the heart of the score heard over the opening and closing credits. The rest of the score (over 70 minutes on the Rhino CD and 90 in the film itself) contains some of the most complex, effective, and aggressive horror music ever composed.
The listener is plunged relentlessly into darkness and suspense with a heart-stopping trio of aggressive cues, "It Knows What Scares You", "Night of the Beast", and "Rebirth". "The Clown" (track 4 on the CD) takes a creepy hold, drawing the listener in as Goldsmith expertly builds into riveting suspense with cues like "Twisted Abduction" and "Contacting the Other Side" before unleashing an orgasmic orchestral explosion of quasi-spiritual beauty in the haunting, ethereal "The Light".

Then there is a brief sigh of relief, and it appears all is well in suburbia; that is until Goldsmith lets loose his explosive, all out, thundering brassy action-horror finale in "Escape from Suburbia", before bringing the shrewdly crafted symphonic roller-coaster to an emotionally satisfying close with a moving rendition "Carol Anne’s Theme" and the "End Credits". 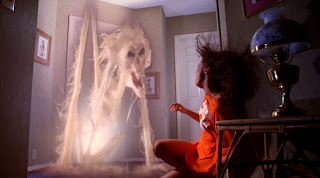 The "Poltergeist" soundtrack is, like the film, an entertaining thrill ride; a rich orchestral journey of scary suspense and otherworldly wonders. It remains more powerful as a stand-alone listening experience today than ever. It is a staggering work of symphonic delight, brilliant in construction and flawless in execution. It is a masterpiece.
In any other year (this was after all 1982, the year of "E.T.") this score would have won Goldsmith his second Oscar, and it stands as one of his top five soundtracks ever.