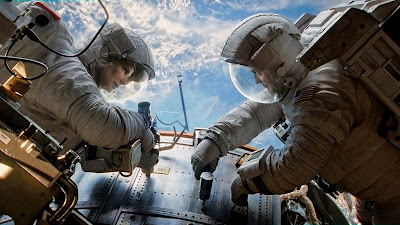 Alfonso Cuarón will make you felt like you spent time in outer space—for real. Not movie space, or science fiction space, the real outer space that begins just outside the outer edges of the earth’s atmospheres some one-hundred kilometers above us. An outer space that has two orbiting space stations and is full of debris and danger. Cuarón gives us an outer space that is so realistic it is eerie and terrifying—and yet at the same time he allows us to experience the beauty stillness and sense of wonder of the final frontier.

“Gravity” is a two character drama about a somewhat routine space shuttle mission where something happens and propels the characters—Dr. Ryan Stone (Sandra Bullock) and Matt Kowalski (George Clooney)—on a suspenseful journey where the tension and danger mount with every second. This movie is absolutely riveting. Every scene, every line of dialogue, every frame in this film matter. This is tight, focused storytelling at its best.

Both actors are fantastic and look for Sandra Bullock to be a major player in this year’s award ceremony, as well as the film itself. Both Bullock and Clooney create unforgettable characters we become emotionally involved in as the crisis begins to mount and turn more and more frightening by the second.

Visually the film is an absolute masterpiece—and not just in terms of the Richard Baker’s visual effects or Emmanuel Lubezki gorgeous cinematography. Alfonso Cuarón is a master of choosing the right camera angle. There are sequences in this movie that are brilliantly directed as anything I have ever seen. Like Neill Blomkamp (“Elysium” “District 9”), Cuarón is a supremely confident director who is a master of visuals and yet always mindful of the characters and the heart of the story.

Bottom line, “Gravity” is an astonishing film that should not be missed. It is the best film so far of 2013.