My alternate top ten films of all time 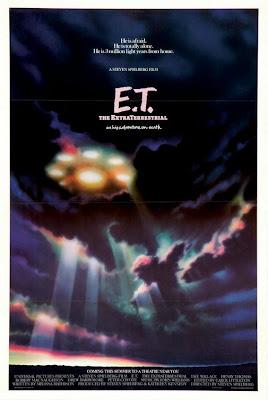 While the critical reputation of the original “Star Wars” (1977) has soared over the past few decades along with its ever growing multi-generational fan base, Steven Spielberg’s arguably best film has been largely forgotten and today is dismissed as just another children’s film from the 80s. Nothing could be further from the truth.

You had be around and of a certain age to understand the tremendous impact this film had on people the first time they saw it in a crowded theater. Spielberg was at the absolute peak of supernatural storytelling skills as he took his thematic material from “Close Encounters”, and with the aid of Melissa Mathison’s superb screenplay, crafted it into a personal story of childhood loneliness, friendship, and love.

Everything in this film—the foggy suburban backyards, the mystical forest, the frightening “men with keys”, the honest performances, and John Williams operatic score—works in this unforgettable work of art. “E.T.” is the friend we all wished we had at one time in our lives—someone who always “will be right here” at our darkest hour of of need. 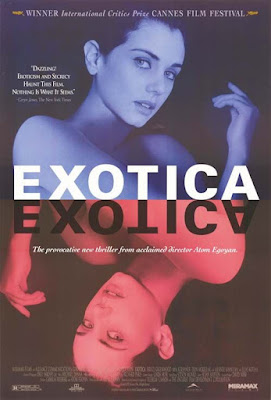 Mia Kirshner first came to the attention of movie fans at the age of 19 with her luminous and haunting performance in Atom Egoyan’s mesmerizing film about tragedy and healing, “Exotica” (1994). Mia plays the role of an exotic dancer named Christina who shares a special connection to a grieving man with a tragic past played by Bruce Greenwood in a superb, beautifully understated performance.

"Exotica" was a big hit during the1994 festival circuit and was nominated for a Palme d’or at The Cannes Film Festival. Roger Ebert even included the movie in his “Great Movies” essay. “Exotica” truly is an artistic triumph on every level, but what makes it all come together is the presence of Mia Kirshner. Her ethereal performance, beguiling beauty, and radiating sexual charisma must be seen to be believed. 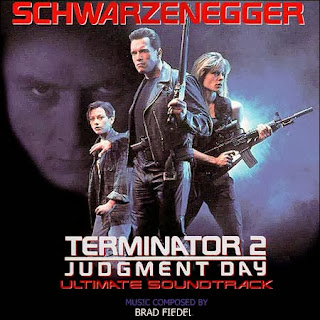 James Cameron is a genius. I do not use that word lightly because it gets thrown around way too much, especially in the areas of sports and entertainment. When it comes to film there are two people who have earned that label—Stanley Kubrick and James Cameron.

“T2” is a landmark film on so many levels. It is the first full scale use of CGI visual effects and it perfected the morphing effect Cameron pioneered in “The Abyss” (1988). “T2” still has the best action sequences of all time—action you can actually follow in stark contrast to the shaky cam over-edited noise that passes for action in most films today.

But above all, “T2” is just a great story about a makeshift nuclear family on the run trying to save humanity from itself. 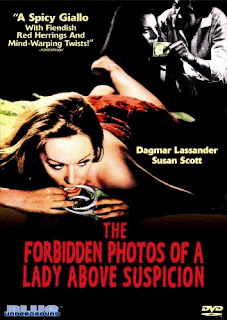 I have a voracious appetite for the Eurotrash films late 60s and early 70s in general, especially the Italian Giallos. The Giallos were highly sexualized thrillers featuring a mysterious black-gloved killer and complex, intricately choreographed murder sequences set to super cool, kitschy music—often by Ennio Morricone, the composer “Forbidden Photos”.

These films are bursting often visual delights, starring beautiful European women and brooding, handsome Italian men. Think of Hitchcock and De Palma but with even more style, outrageous violence, and over the top sex.

Although any newbie to this genre would be advised to start with the two masters who bookend the Giallo era—Mario Bava and Dario Argento—“Forbidden Photos” boast some formidable credentials of its own. Luciano Ercoli is a confident director who know how to deliver this material. Workhorse Ernesto Gastaldi is a terrific writer who has authored dozens of classic both in and outside of the genre.

Besides being a visionary and the greatest action director of all time, James Cameron is knows how to write great romance and at its core “Avatar” is a love story.

There are a lot of reasons that “Avatar” become the event film of the decade and broke box office records. It has action, romance, and invented a new way of seeing and experiencing movies. But what makes “Avatar” a classic worthy of this list is its heart. “Avatar” is a film with a philosophy.

Cameron was told early on by studio executives to change his approach and lose the magic of mother earth subtext. But if ever there was a man who lived by the credo of the John Locke/Smoke Monster character of Lost, "Don't tell me what I can't do", it is James Cameron.

The philosophical subtext of Avatar interconnects beautifully with the corporate weasels of the "company" in “Aliens” (1986), and the apocalyptic inevitability of “The Terminator films”. It has been a running thematic thread in all of James Cameron's work, as omnipresent as the strong female characters, the mushy romance, and the adrenaline fueled pounding kick ass action sequences. 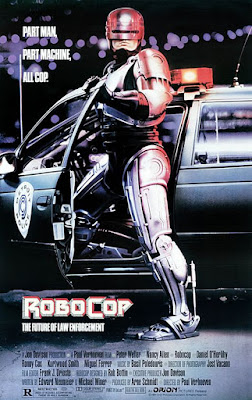 Paul Verhoeven was a Dutch auteur who came to America and re-invigorated genre cinema, unleashing a smash-mouth style of film-making that woke up stupefied movie-going drones with fierce cocktail of adrenaline, action, sexuality, and overt political and social commentary.

The great Verhoeven trilogy (“Robocop”, “Total Recall”, “Basic Instinct”) could never be made by a major studio today. Sure there was the 2012 “Total Recall” remake. It was beautiful but bland. And do not believe the hype about the “Robocop” remake. It too will lack the balls—and the heart—of this 1987 science fiction masterpiece.

The frightening part is just how prophetic the dystopian world of “Robocop” has turned out to be. Not only has the world of O.C.P where everything is privatized under evil, corrupt, greedy corporations come true—in the post Citizens United Koch brother’s controlled Tea Party world of 2013—the rapid right wing surge of America has far surpassed the dark dystopia created by screenwriters Edward Neumeier and Michael Miner.

Even the villians in “Robocop” would fail to pass today’s conservative litmus test. 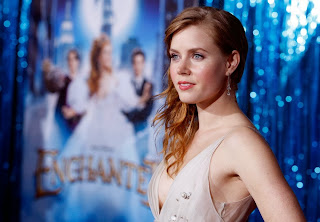 Sometimes a movie comes together where everything works with such effortless precision that the final film surpasses even the highest expectations of the creators. This is rare occurrence happens maybe once every decade or two. “E.T.” (1982) was such a movie. So was “Beauty and the Beast” (1991).  So is “Enchanted”. It is movie magic.

Having a storyline where animated characters cross over in the real world is a high risk payoff. Often it is disastrous (“Cool World” (1992)). But when it works (“Who Framed Roger Rabbit” (1988)) the upside is tremendous.  And in “Enchanted” the transitions between worlds are so seamless and so sincere, the movie stands as the both the ultimate homage to every animated Disney classic ever made, and a modern masterpiece in its own right.

The beguiling Amy Adams is simple magical. She really is an animated character come to life. And the music—the score might just be Alan Menkin’s best yet. “So Close” is my favorite movie song of all time and the ball room sequence where it is performed is a scene as unforgettable as the one in “Beauty and the Beast”. 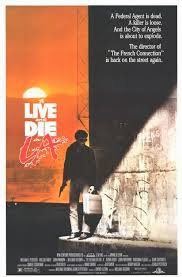 This underrated 1985 William Friedkin directed action film noir features the best action sequence of all time not directed by James Cameron.  It is a car chase, and I mean it is a CAR CHASE! Friedkin and company set out to top the director’s famous car chase in “The French Connection” and boy, did they ever!

“To Live and Die in LA” features a pre-“CSI” William Peterson. He is the perfect hard-boiled leading man—handsome, tough as nails, cynical, highly sexual, and a reckless adrenaline junkie. His nemesis, a counterfeiter who leads a double life as a famous LA painter, is played with retrained perfection by the great William Dafoe.

The propulsive electronic pop soundtrack is by Wang Chung 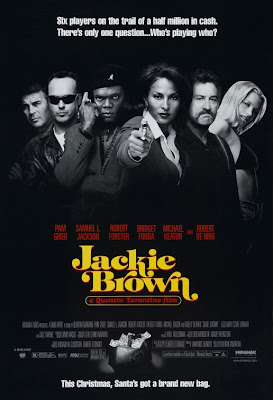 “Jackie Brown” may not have the over the top violence and outrageous attitude of other Tarantino films, but it is a tremendously entertaining film, meticulously crafted in every aspect. There is something about the combination of Tarantino’s savvy directorial style and Elmore Leonard’s hard-boiled writings and characters that make for a synergistic marriage made in pop culture heaven.

The original Blaxploitation superstar, the statuesque Pam Grier is captivating in a complex performance as she takes us into the hidden and intricate world of bond bailsmen, ex-cons, gun runners and federal agents. The chemistry between her and the late, great Steve Forster is simmering even when not a word is being spoken.  Samuel L. Jackson gives yet another wickedly cool performance and the beach house scene with him, Robert De Niro and Bridget Fonda is vintage Tarantino.

Of course, the soundtrack is fantastic. Or as Samuel L. Jackson’s Ordell Robbie said, “Do you like The Delfonics?” 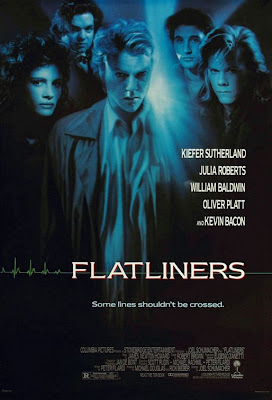 This one of the scripts I studied when writing screenplays. It has a tight, magnificent, classic structure where every scene moves the story forward. It also has one of the best loglines in movie history that goes something like this:

A group of brilliant, adventurous medical students attempt to explore the mysteries of the afterlife by experimenting on each other inducing death and resuscitation and bring back something sinister from beyond.

Walk into a studio executives office in the mid to late 80’s with that pitch followed by the words “brat pack” and you would have got yourself a deal.

But this is not “St. Elmo’s Fire” or “The Breakfast Club”. It is not a brat pack movie at all. The critics at the time who dismissed this movie as a vapid exercise in style really missed the call on this one.

“Flatliners” is a spooky, serious science fiction thriller—tightly wound, suspenseful, and loaded with knockout performances. All five of the film’s stars are tremendous but it is Kevin Bacon who really shines here. The dialogue is outstanding—witty, realistic, funny—containing a pitch perfect flow and rhythm. Joel Shumacher may not be one of the greatest directors of all time, but he did direct two of the greatest films on my all-time list—“Falling Down” and “Flatliners”.

James Newton Howards haunting musical score is still unavailable in a commercial release as of this writing.
Posted by James J. Caterino at 8:44 PM