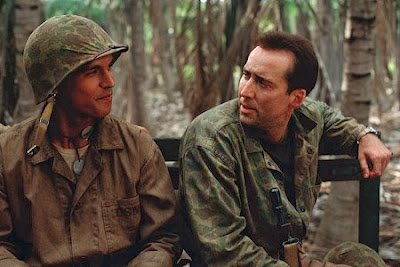 “Windtalkers” is a 2002 feature film directed by Hong Kong action auteur John Woo starring Nick Cage andAdam Beach. It is a Pacific based WWII action drama offering a unique twist. The movie focuses on the little known military practice of the war where the U.S. military would use Native Americans of the Navajo Tribe to send and receive coded messages in their native language. It is a fascinating aspect of the war—and also a frustrating one. The Native Americans were not treated as equals and then there is the overhanging historical truth that the very government forcing them into service also is responsible for slaughtering their people and stealing their lands.
All of this background adds to the dramatic tension of the story, because at its heart, “Windtalkers” is the moving story of an unlikely friendship between the bitter Sergeant Joe Enders (Nick Cage) and a caring and patriotic Navajo code-breaker (Adam Beach). When it comes to musically scoring dramatic tension, action, and big bold emotional material, James Horner is the ideal composer.
“Windtalkers” premiered at a time when audiences had grown weary of war films in the post “Saving Private Ryan” boom. As an added obstacle at the time there was the frightening spectacle of real war looming as Dick Cheney and his gang of neo-con warmongers began to unleash a pack of lies to pre-sale an invasion of Iraq to the American people. As a result, “Windtalkers” flopped at the box office and both the film and James Horner’s underrated dramatic score have been largely forgotten. 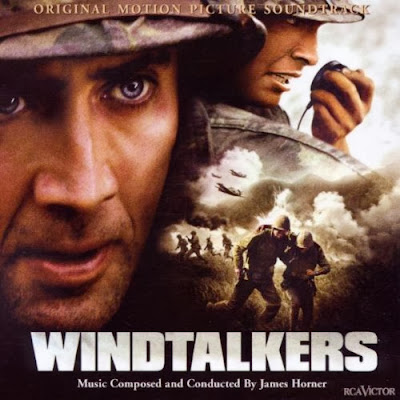 The “Windtalkers” soundtrack album is sequenced into eleven cues giving Horner ample room to deliver his trademark style of longer, full-bodied, richly developed cues that give the music room to breathe and take us somewhere. Track one, “Navajo Dawn” is such a cue—7:54 of musical might beginning with a Native American motif before blending into a gentle introduction to the main theme, a beautiful “Coccoon” style theme with shades of Horner’s love theme from “Braveheart”. It is a gorgeous, moving main theme that takes on its own unique identity later in the score as Horner skillfully develops and utilizes it. The track then makes a seamless transition into the score’s danger and suspense, some of it very reminiscent of “Aliens”, and used with chilling effect here.
Track two, “A New Assigment” is 4:38 gives us Horner’s first full statement of the main theme. This is powerful, emotionally charged music. “An Act of Heroism” follows with more “Aliens” style brooding strings before segueing into a tender statement of the love theme and the introduction of the best instrumentation choice of the score, an ethnic flavored flute echoing the Native American influences in the score. Horner is great as at a lot of things, but he stands alone in his ability to create epic scores that pay tribute Native American music and culture (“Thunderheart”, “Legends of the Fall”, “The Missing”, “The New World”, and even “Avatar”).
The middle section of cues, starting with “Taking the Beachhead”, is where Horner unpacks the might of his orchestral muscle and strategically unleashes his action music on us. Make no mistake, this score is loaded with exciting stuff—pulse pounding brass bursts and propulsive percussion—vintage Horner action material an action music fan will relish.
“Friends is War” is a wickedly exciting cue, jam-packed emotional tension and dramatic suspense, and one of Horner’s original action and suspense tracks. In other words, aside from a few brief snippets of his “danger motif”, it does not sound like anything pulled from the Horner action library. This cue ends on a note of moving melancholy executed with artistic perfection. More pulse-pounding dramatic excitement ensues with orgasmic bursts of brass in “A Sacrifice Never Forgotten” before Horner begins to wind the score back down for its emotion-drenched moving finale.
“Calling to the Wind” is 10:33 of orchestral might as Horner puts his command of craft on display as he brings his home for the big finish. This is the money cue—the lump in throat—the tear in the eye—the track that will sonically wrap around your senses and make you feel the music and lose yourself in the world Horner has created.
Bottom line: Although not as fully cohesive or unique as Horner’s classic “Legends of the Fall” or his follow up to this score “The Missing” (2003), “Windtalkers” is vintage Horner in top dramatic form.

Super scary soundtracks
Best music for a melodrama ever
Soundtrack album hits the mark just ‘In Time’
To Gillian on Her 37th Birthday
Love lives on
Posted by James J. Caterino at 8:20 PM