Powerful 'JFK' is John William’s at his dramatic best 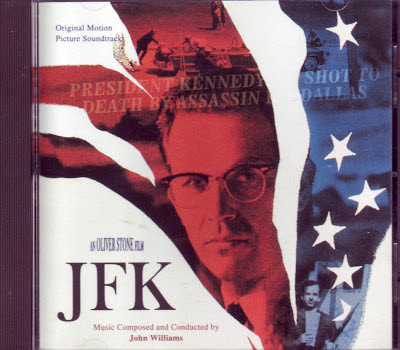 Steven Spielberg will always be the primary director associated with John Williams and his enormous contributions to the success of so many Spielberg films and to his auteur mystique cannot be overestimated. If you had to pick a director who would come in second place in the John Williams cannon of film music, it might be Oliver Stone and the Stone/Williams historical trilogy of “Born on the Fourth of July” (1989), “JFK” (1991), and “Nixon” (1995).

Oliver Stone brings out the serious side of Williams—all three of these scores are filled with emotionally powerful, gut-wrenching moments. But given that this week is the fiftieth anniversary of the murder of President John F. Kennedy, this review will focus on William’s soundtrack for Oliver Stone’s masterfully stylish debunking of the preposterous pack of lies known as The Warren Commission, “JFK” (1991).

The early 90s were an interesting phase of the ever developing style of William’s—a period when he was beginning to leave behind his blockbuster style and develop new techniques of layered rhythms and structural complexities. It was a rich and creatively productive period resulting in several varied and classic scores including “Home Alone” (1990), “Hook” (1991), “Jurassic Park” and “Schindler’s List” (both for Spielberg in 1993), and of course, “JFK” (1991).

“JFK” is also unique in the approach Williams took. The film is scored with stand-alone set pieces, rather than the cohesive symphony approach the maestro usually employs. Whether this was Stone’s edict or William’s idea does not matter—only the end result does—and the music in the film is staggering in its effectiveness—both in support of the on-screen drama and as stand-alone album that engages the listener on a whole new level of electric excitement and bold emotion.

“Prologue” is vintage Americana John Williams at his most elegant as the cue introduces the powerful and mournfully moving nostalgic “JFK” theme. There is even a wonderful, whimsical, spirited “B” theme that segues into an emotionally powerful finale. What a track—4:01 of pure musical bliss for any fan of film music.

Track two is the ultra-intense, riveting suspense cue, “The Motorcade” used to underscore the horror of that fateful day in Dallas. This is Williams at his most masterful, artfully—and seamlessly—weaving atonal material and frenzied action motifs with undercurrents of the main theme; exciting stuff.

Next up is “Theme From JFK” an exquisite, touching piano based rendition of the main theme that finishes up in an atonal motif hinting at the darkness lurking in the shadows of the conspiracy. “Eternal Father, Strong To Save” is the music used to score some of the “business of government” post-assassination vintage news stories and clips used in the movie. “Garrison’s Obsessions” is a superb, spooky suspense action cue that could have come out of horror film—wonderful, aggressive, scary stuff.

Then there is perhaps the ultimate signature cue from “JFK”—certainly the most popular and influential—“The Conspirators”—a wickedly exciting Morricone-esque action/suspense cue that is chilling and irresistible.  Things get even scarier with the haunting “The Death of David Ferrie”.  This really is horror film scoring at its most artful and effective. “JFK” is John William’s “X-File” score.

But this is also the story of a family—and a man losing his to an all-consuming obsession. “The Garrison Family Theme” showcases the composer’s unparalleled ability to compose gorgeous themes that instantly generate sentiment and latch on to the ear—and the heart—of the listener.

Then it is back to the brooding paranoia of a dark web of conspiracy in the creative suspense cue “The Witnesses” before taking us into the dramatic “Arlington”, the best track on the album. “Arlington” is the music that plays during the outstanding scene where Kevin Costner as Jim Garrison goes to Washington D.C. to meet with the mysterious Mister X played by the great Donald Sutherland followed by Garrison’s visit to Arlington. This is the maestro at his absolute best—an incredible piece of music.

Williams takes us home by putting the final touches on his dramatic masterwork by giving the listener a glorious emotional crescendo in “Finale (JFK)” followed by “Theme From JFK (Reprise)”.

Keep in mind six of the 18 tracks are non-score songs that will shatter the mood. Unlike “Born of the Fourth of July” which had “Moon River”, none of the songs add anything to the listening experience so best to program them out and allow this landmark score to wash over you.

Bottom line: John Williams has just proven once again with “The Book Thief” that his astonishing skills are as sharp as ever and this week’s 50th anniversary of JFK’s murder is a perfect chance to go back and experience of William’s best scores.