Return of the Jedi, soundtrack review 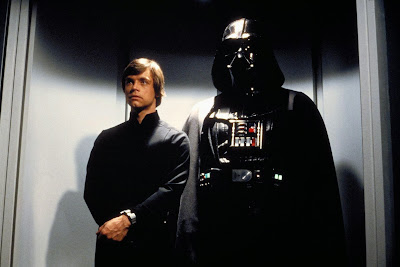 John Williams recent musical output is nothing short of astonishing.  The epic sweep of “War Horse” (2011), the jazzy action of “The Adventures of Tintin” (2011), the stately “Lincoln” (2012), and this year’s haunting score for “The Book Thief” prove the maestro is not just at the top of his game—he actually continues to grow and evolve as an artist—showing a command of craft far beyond any other living, currently producing composer.

The above works all demonstrate an ever growing complexity in William’s stylistic tendencies, a pattern that has persisted since the early ‘90s. This is a good thing of course because an artist must grow and evolve and continue to meet new challenges or else face stagnation and inevitable decline. These recent works are serious compositions and it is criminal that none of them won the Oscar. “Warhorse” should have won in 2011 and although “The Book Thief” will no doubt get a nomination, given the mixed reviews of the film it is a long shot to take home the statue. 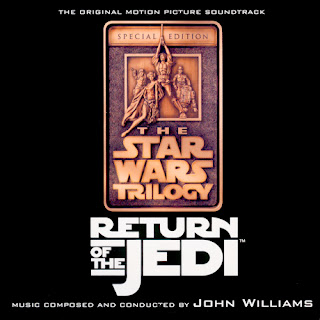 But as wonderful as these recent scores have been, there are times when fans want to go back in indulge in some classic John Williams, when he was operating at the peak of his blockbuster style. “Return of the Jedi” (1983) is such a score. Although the “Jedi” score (similar to the film) is not held in quite the same esteem as its two classic predecessors, “Return of the Jedi”—especially as presented in the 1997 RCA re-mastered/expanded two-disc collector’s edition—is a thrilling, mesmerizing and immensely entertaining listening experience that any film music fan will relish for endless hours. 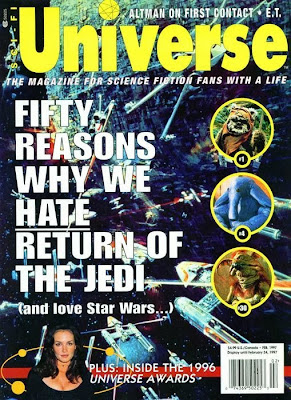 During the “Star Wars” resurgence of the mid-‘90’s it became fashionable among the geek elite to dismiss “Return of the Jedi” as the “Godfather Part III” of “Star Wars” films. This is way off the mark as anyone who was there in 1983 can testify, the reaction to the film was tremendous. One of the all-time great genre magazines, “SciFi Universe” even published a lengthy, obsessively detailed, and hilarious cover story entitled “Fifty reasons we hate ‘Return of the Jedi’ “. However, balance has been restored to the force since that time and “Jedi” is held in somewhat higher regard now—due in large part to how messy and uneven the recent prequels were. 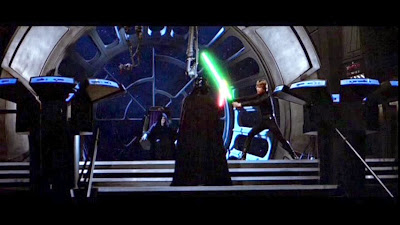 “Return of the Jedi” may not be “Empire”, but it contains some of the best scenes in the entire franchise, particularly the dramatic Throne Room scenes with Luke, Vadar and the Emperor. The music in these scenes is both inspiring and chilling—especially the use of an ominous chanting choir for “The Emperor’s Theme”. This theme along with the gorgeous “Luke and Leia” and the jaunty “Parade of the Ewoks”, form the backbone of the new thematic material. All three of these themes get plenty of work and a variety of statements throughout the 148 minutes of music on the RCA release.

After opening with the traditional Fox/Lucasfilm fanfare and main title crawl, disc one drives straight into the action and suspense with “Approaching The Deathstar/Tatooine Rendezvous”, a robust cue announcing the return of Vader with several interwoven statements of “The Imperial March”.  When the action cuts to Tatooine, the music begins with a rich, otherworldly suspense motif that foreshadows the Jabbe theme and gives a hint of “The Force” theme for the arrival of a clad-in-black-cape now fully functioning as a bad-ass Jedi Knight Luke. 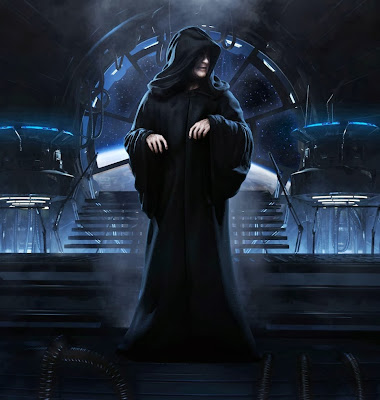 “The Droids Are Captured” is a brief—and brilliant—vintage Williams’s suspense cue full of classic John William’s exciting gestures and colorful danger motifs. “Return of the Jedi” is packed with irresistible score material that some might describe as incidental music—the stuff in between the big action set pieces and concert style thematic statements.  This is where Williams shines in way almost no other composer does. There is always something interesting and imaginative to take in and absorb. It is a very visual way to paint a musical feel of mystery, danger, and tension—reminiscent of the composer’s avant-garde “Lost in Space” music.

“Bounty For A Wookie” showcases Jabba the Hutt’s theme—a slow, bouncy, rolling, tuba-based entertaining piece of music that sounds exactly like music for Jabba the Hutt should sound. Always finding the exact right sound for a character, another unparalleled strength of the maestro.  Both Jabba’s theme and “March Of The Ewoks” are musical descendants of William’s classic “March Of The Villains” theme from “Superman” (1978). 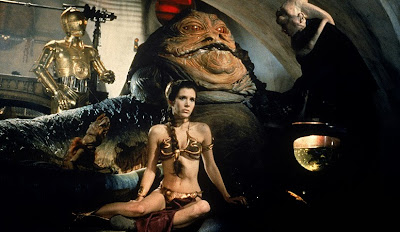 "Luke Confronts Jabba/Den of the Rancor/Sarlacc Sentence" is the first of many ferocious action set pieces that continues to develop in "The Pit of Carkoon/Sail Barge Assault", a knockout cue featuring the rousing suspense and explosive action music from Luke’s walk off the plank. This scene also has one of the best heroic statements of the main theme.

The thread of action music running throughout “Return of the Jedi”, right up through the three “The Battle Of Endor” tracks, is astonishing. This is John Williams action scoring at its most energetic—full of bursting brass and escalating tempos—very much in the same pulse-pounding, frenetic, wild-and-yet precise over the top bombastic style of another blockbuster masterwork Williams would compose the following year, “Indiana Jones and the Temple of Doom” (1984). 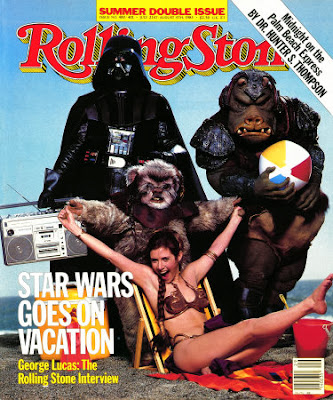 The outstanding tracks mentioned above are not the highlights of the album—because the entire soundtrack is a highlight. Listening to music from the original “Star Wars” trilogy—in a proper presentation such as the 1997 RCA expanded special edition albums—is a fully absorbing, out-of-body transporting experience. There is a musical narrative to “Return of the Jedi”. It is the final movement of grand, sweeping opera—soundtracks that tell a story in a deeply affecting way that only music can do. Outside of Howard Shore’s masterful “Lord of the Rings” trilogy, there is nothing else like it in the history of cinema quite like it.

Bottom line: “Return of the Jedi” is a captivating classic—a riveting, endlessly entertaining soundtrack by a master composer at the peak of his blockbuster style of scoring and a must own album soundtrack collectors or anyone who simply wants to hear great music.