‘The Hobbit’ strikes back with a rousing sequel

“The Lord of the Rings” trilogy became an instant classic garnering critical praise, a trophy case of awards–and not just in technical categories like other genre fare—and monstrous world-wide box office returns. So when Peter Jackson returned to Middle Earth and took on the prequel novel “The Hobbit”, it came as a shock when the film was greeted with mixed to negative reviews.
“The Hobbit” is actually a far better film than the Rotten Tomatoes critical consensus would have you believe. The movie was hamstrung by a slow-moving first hour where the notorious detail-obsessed director seemed insistent on visualizing every minute aspect of exposition from the classic novel. The sluggish pace of the opening scene even became the subject of a hilarious SNL skit. But once it got moving, “The Hobbit” became an exciting sword and sorcery fantasy adventure with some wonderful moments, right up there with the best stuff from the “Lord of the Rings” trilogy. 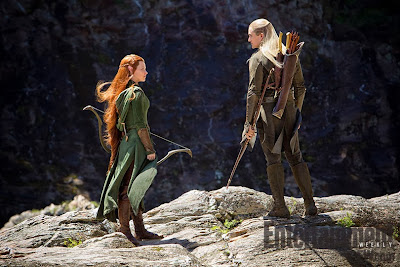 The good news is not only does “The Hobbit: The Desolation of Smaug” start off in mid-action, it ups the ante in just about every aspect, taking the action and dramatic intensity to a whole new level. Peter Jackson’s direction is beyond superlative. There is one exhilarating battle involving the dwarves, elves, the Orc, and raging rapids that is one of the best choreographed action sequence of all time—truly amazing stuff.

Howard Shore’s fantastic score is packed with thunderous brass and moving emotional moments. The master composer gives us plenty of new material and some of the greatest action music to hit the screen in years. The film even looks better than its predecessor with scene after scene of jaw dropping visual wonders as Weta works their incredible magic. 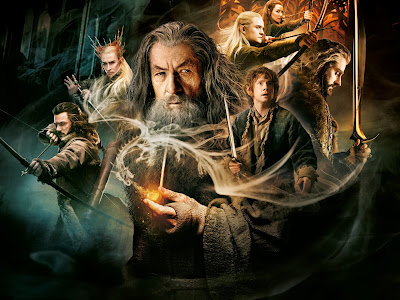 On top of all this, we get several great new characters—including Smaug, the dragon of the title, and Tauriel, a fierce elf warrior played Evangeline Lilly (Kate from “Lost”). Tauriel is a wonderful character and Evangeline is absolutely electrifying in the role. As was demonstrated on “Lost”, she is so good at portraying a conflicted character falling in love.

Bottom line: ““The Hobbit: The Desolation of Smaug” is a rousing, colorful, immensely entertaining, spectacular epic fantasy that resonates from start to finish. The two hours and forty-one minute running time flew by and I left the theater longing for more.