Readers weigh in on the dramatic action of "Caitlin Star" 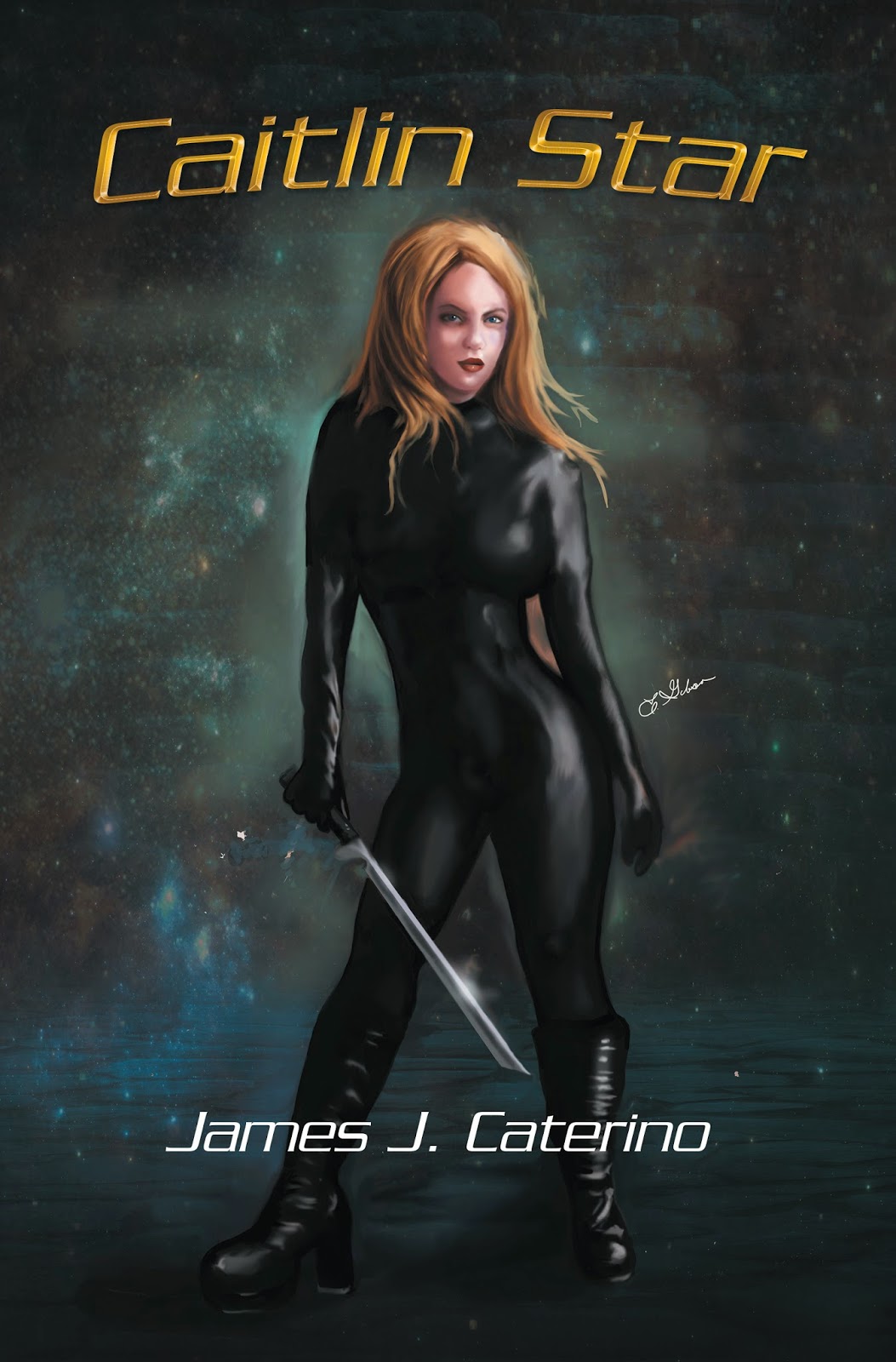 Here are a few customer reviews of  "Caitlin Star" from Goodreads and Amazon.

5 of 5 stars
“Caitlin Star” by hot-now voice, James Caterino, is sure to rock your reading world. The author’s voice thunders over the countless YA fiction books on the shelf, soaring high above the standard.

Caitlin Star is a worn down foster kid… that’s why the brilliantly sculpted character, Gunner, is here to help. After being rescued by Gunner, Caitlin transforms into the powerful woman begging to come out that’s been trapped inside her. Join her on a heart-racing journey to defeat the humanoids known as the Bull Mongoni.

This story delves deep into the human psyche, as we see the world through Caitlin’s eyes altering as she learns new philosophies, and broadens her horizons. She and Gunner will embark on a world-wild, cultural movement that will leave your heart racing and screaming for victory! The politically corrupt world that surrounds them is dangerous: The line that separates church and state has been brutally demolished, national parks have been taken over by the oil industries, free-thinking is outlawed, and if you dare object to anything, the Moral Authority WILL find you! As if that wasn’t enough reason for a revolution, Caitlin Star won’t stand for women’s rights being taken away: after all, it’s not fair for women to be owned and defined by a tracking probe.

The plot-line is outstanding, well developed, and an emotional yet thrilling ride. Caterino carefully sets the stage and keeps the fast pace throughout the entire novel. One of the most difficult things to do in writing dystopian fiction, is set up the world in a consistently believable way; Caterino flawlessly showcases this as he exposes his unbelievable skills as writer.

The characters are golden! Caitlin Star’s voice is prominent, never fading, and strong. She is certainly an inspiration to humanity. She has mad fighting skills, a powerful mind, an independent nature, and a determined attitude. Her character is so diverse and well sculpted that it’s as if she’s a memory in my mind: I remember her as if I’d met her in actuality. This book will be an empowering read for all women.

But if you think this is merely a feminine movement, think again. While women would certainly enjoy this book, it has something for everyone. Men will instantly become enthralled in the action, a bit of gore, and gripping storyline. Diabolical characters and plans are everywhere and it’s up to Caitlin and Gunner to put a much needed end to it all!

For fans of James Caterino, this book will satisfy your craving. For new readers of the Caterino phenomenon, this is the perfect place to start. Beware: once you begin this literary journey, you can never get enough! Luckily, he has several books out and is still typing away!

Politics, breath-taking warriors, epic to-the-death battles, a touch of romance, hot sex, and some satire for good luck: this book holds it all and much, much more! Caitlin Star is the woman of the generation, a fresh new voice waiting to be heard. If the next generation is HALF the woman she is, we will be in good hands.
5 likes

5 of 5 stars
bookshelves: dystopia, action, sci-fi, young-adult-new-adult,favorites
"Caitlin Star" is one of those books that does not fit neatly into any one category or genre.

The setting is a contemporary/near future North America where an oppressive government rules by way of fanaticism and enforces its will by means of a militant storm-trooper styled police force known as "The Moral Authority". Question them at your own peril.

But in all tales of oppression there must be an underground resistance of sorts and this time they come in the form of a ruthless band of Samurai style warriors known as "The Bull Mongoni". They are led by a mysterious man named Gunner Star and his latest protege, the title character Caitlin.

The Bull Mongoni make their move via the latest sporting event craze in this dark world - bloodthirsty Gladiator styled battled to the death known as "The Stadium Games".

I really liked how the author gave us some chapters from the villain's point of view, the President of The Moral Authority, and let's us see how his mind works and how he believes he is doing the right thing.

To say more would spoil the fun and this fast moving, wild tale is, above all else fun! The writing is very visual and very vivid, like a graphic novel in prose form. Keep in mind, there is violent sword play, blood-lust, sex, and lots of adult language. The Bull Mongoni are a fearsome group of anti-heroes and they play rough.
1 like ·

As I read the first chapter of this book I could not help but thinking aspects of it linked to the plight of Native American's. As the scene was set for the first big battle between the Bull Mongoni and the Moral Authority I could not help think about a quote I had read:

This first chapter draws you into the book and you don't leave it until you have turned over the last page. This is a stunning read with excitement and character development all in equal proportions. The fighting scenes are brutal but not drawn out to the extent that you lose what you are reading. The book is so well written it was only after I had finished that I realised there were others in the Bull Mongoni series that precedes this one. As a stand alone novel it is more than adequate.

The book comes with a warning from the author of bad language but I have to admit I hardly noticed this and am intrigued that some reviewers thought this spoilt the book. The language is used in the context of the characters and the situation. The middle section of the book is detailed and develops the characters well. I am hoping that we meet them again in later novels. If I was to find one negative it would be that every time Gunner Star is introduced to the story we are told he had a strong baritone voice. After the first couple of references, this began to grate on me. That really is the only negative I can find for this simply stunning novel.

It has been a long time since I have enjoyed a novel as much as this one. It has left me wanting more from the Bull Mongoni, Caitlin Star and this author.


When you wish upon a Star

The man named Gunner Star returns in the latest action packed adventure from author James J. Caterino. But this time Gunner plays a supporting role as his blossoming warrior princess takes center stage - Caitlin Star. For those unfamiliar with Caterino's Gunner Star novels, Caitlin Star is the perfect place to start. The world is a darker place than ever; with corruption and oppression run rampant and live televised beheadings sold as mainstream entertainment. Yet hope springs eternal as a rebel movement takes hold, a movement led by Action Heroes trained in the art of hand to hand combat mastered by an ancient race of hominids known as the Bull Mongoni. Caitlin Star chronicles the rise of a girl more wondrous than Wonder Woman, stronger than Sheena and braver than Merida. Caitlin Star is her own woman who follows a moral compass to restore goodness and humanity to a world gone mad. Packed with political intrigue, breathtaking battles and biting satire, Caitlin Star is the written equivalent of a video game, a graphic novel where the words are the pictures, a triumph for Caterino. I can only pray that my own daughter grows up to be half the woman Caitlin Star is.

Jim draws you straight into the fantasy and holds you there until near too-predictable the end. The action charges at you like a Bull Mongoni Warrior. The scenes between the action scenes keep the plot on track. In most of his books, Jim takes you to the center almost immediately. Jim could write a masterpiece with a little editing help. Or, he could turn the Star and Bull Mongoni books into graphic novels. What a hit he would have on his hands.

I loved Jim's imagination, plotting and pace. The main characters were, in the context of the story, believable, but most of the secondary characters we cardboard cutouts or pop-ups.

I admire Jim's ideas, plots and the meter of the story. He has all the creative tools for success. What he lacks in craft can be learned.

Obi the poet
Posted by James J. Caterino at 3:06 PM