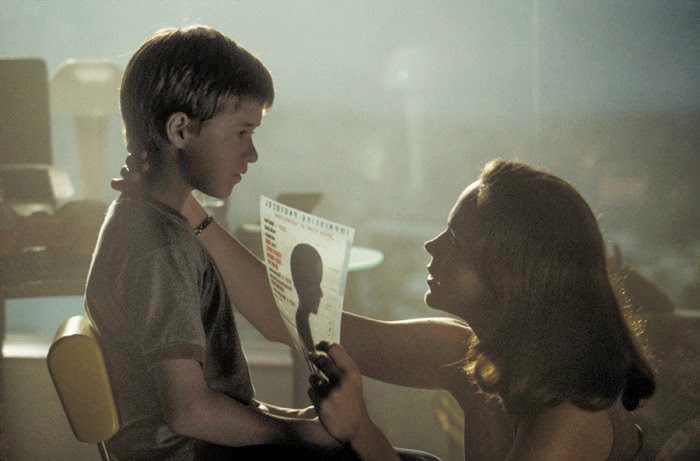 “For Always” (2001) from “A.I. Artificial Intellignce”
Music by John Williams
Lyrics by Cynthia Weil
Steven Spielberg channels his inner Kubrick in this deeply affecting film—a criminally underrated masterwork. The bearded one is at his absolute best as he boldly takes his artistry to a whole new level—as does his long-time musical collaborator John Williams. “For Always” is an exquisite song rendition of John William’s haunting, melancholy theme from the movie—not really so much of a love theme—but a heart-breaking longing theme as the film’s protagonist David embarks on epic search to find all the matters to him, his mother’s love.
“The Dream Within” (2001) from “Final Fantasy: The Spirits Within”Written by Elliot Goldenthal and Dick RudolphPerformed by Lara Fabian
2001 was quite the year for outstanding Lara Fabian vocal performances in relatively unknown movie soundtrack songs with haunting melodies. Another superb soundtrack song from a master composer—this time Elliot Goldenthal. “Final Fantasy” is somewhat of a mixed bag as a film experience—the technology of rendering motion captured regular people just wasn’t quite there yet to overcome the creepy factor. But wow, what a soundtrack. Goldenthal’s epic score for “Final Fantasy” is in the same league as Howard Shore’s “Lord of the Rings” trilogy—truly epic.
"A Dream Worth Keeping" (1992) from “Ferngully: The Last Rainforest”
Written by Jimmy Webb and Alan Silvestri
Produced by David Foster
Performed by Sheena Easton
“Ferngully” had the misfortune of opening during the early years of the Disney animation renaissance. A misfortune because this is a 20th Century Fox film and at the time Fox had no idea had to properly market this underrated gem—a gorgeous, magical film with a powerful bittersweet story. It is every bit as good as the Disney masterworks of the era—as is this song—a pitch perfect emotional ballad sung with bravado and heart by Sheena Easton.
If you are fan of James Cameron’s “Avatar”, then you will love “Ferngully”.
"Far From Over" (1983) from “Staying Alive”
Written and performed by Frank Stallone.

The consensus is that the reviled “Staying Alive” is an epic bomb and one of the worst films ever made. Well, the consensus is dead wrong. This much maligned “Saturday Night Fever” sequel is wonderful, melodramatic, irresistible pop entertainment anchored by a charismatic cast and a terrific soundtrack featuring the Bee Gees again, as well as director Sly Stallone’s crooner brother Frank. The original was true ‘70s cinema—a bold, realistic drama with an art film sensibly. “Staying Alive” is very much a product of the ‘80s—glossy music video styled junk. But like “Flashdance” and “Footloose”, it is really good junk.
This exciting piece of ‘80s pop music is all but forgotten today, but this tune actually did get a substantial amount of airplay in the summer of 1983 and the song received an Academy Award Nomination for Best Original Song.
“I'm Never Gonna Give You Up” (1983) from “Staying Alive”
Written by Frank Stallone, Vince DiCola and Joe Esposito
Performed by Frank Stallone and Cynthia Rhodes
A great ballad from the above mentioned guilty pleasure. One of the pleasures of “Staying Alive” is Cynthia Rhodes. Not only is she a great dancer, but as this ballad showcases, a pretty good singer too. She even showed she could play an action hero a year later when she co-starred with Tom Selleck in Michael Crichton’s “Runaway”. She had such a warm on-screen presence. Too bad the talented actress did not make more films.
“Cindy” (1970) from “Cindy and Donna”Now on to the obscure part of this article’s headline. “Cindy and Donna” is a glorious, kitschy—and surprisingly effective—sexploitation film from the glorious grindhouse days. About the only the place this movie can still be seen is on the “Drive-In Cult Classics” movie collection—a bargain to purchase and a must own for serious film buffs and retro pop culture fans. The far out ballad that plays over the opening credits is an irresistible guilty pleasure that screams 1970. Unfortunately nowhere in the film’s credits does it give any information about who wrote or performed this song, but I am guessing the movie’s composer Robert O. Ragland at least wrote the music.
“I Want To Spend My Lifetime Loving You” (1998) from “The Mask of Zorro”Music by James HornerLyrics by Will JenningsProduced by Jim StenmanPerformed by Marc Anthony and Tina Arena
Granted this song is not obscure, but it really only got noticed in Europe back in 1998 and has been all but forgotten since. It is a wonderful, energetic love theme and a perfect complement to James Horner’s sensational score. The music from “The Mask of Zorro” is exciting stuff—powerful, fluid, suspenseful, emotional, vertical, and always light in its feet. One of the best adventure soundtracks of all time.
"Listen to the Wind" (2005) from “The New World”Written by James Horner and Glen BallardPerformed by Hayley Westenra
Another knockout piece of musical magic from James Horner. A beautiful, soaring, meditative, moving song exquisitely performed by Haley Westrena. Horner’s soundtrack—as well as this film can be seen as an “Avatar” precursor and this song a prequel to the Leona Lewis performed “I See You”.
"Rejoice in the Sun" (1972) from “Silent Running”Written by Peter Schickele and Diane LampertPerformed by Joan Baez
When I took a science fiction class in college the professor screened two films for the class—“Blade Runner” and “Silent Running”. Arguably one of the three or four greatest science fiction movies of all time, “Silent Running” is a filmmaker’s film and its influence of the a generation of artists has been all encompassing. At its core, this is independent, irreverent, art-house movie-making and having legendary counter-culture folk singer-songwriter Joan Benz perform the wonderfully depressing songs is a perfect touch.
“Love Lives On” from “Harry and the Hendersons” (1987)Music by Bruce Broughton and Barry MannLyrics by Cynthia Weil and Will JenningsPerformed by Joe Cocker
After it disappeared from empty theaters back in 1987 both the film and this amazing song faded into oblivion despite (or because of) a misguided attempt to turn the movie into a syndicated sitcom. But the big guy is making a comeback thanks to home video and now—like many of the ‘80s Amblin stuff—has a minor cult following. “Harry and the Hendersons” is a moving and entertaining reworking of the “E.T.” formula. “Love Live On” ends the film on a perfect, bittersweet note over a cool animated credit sequence.