A guide to ‘The Planet of the Apes’ 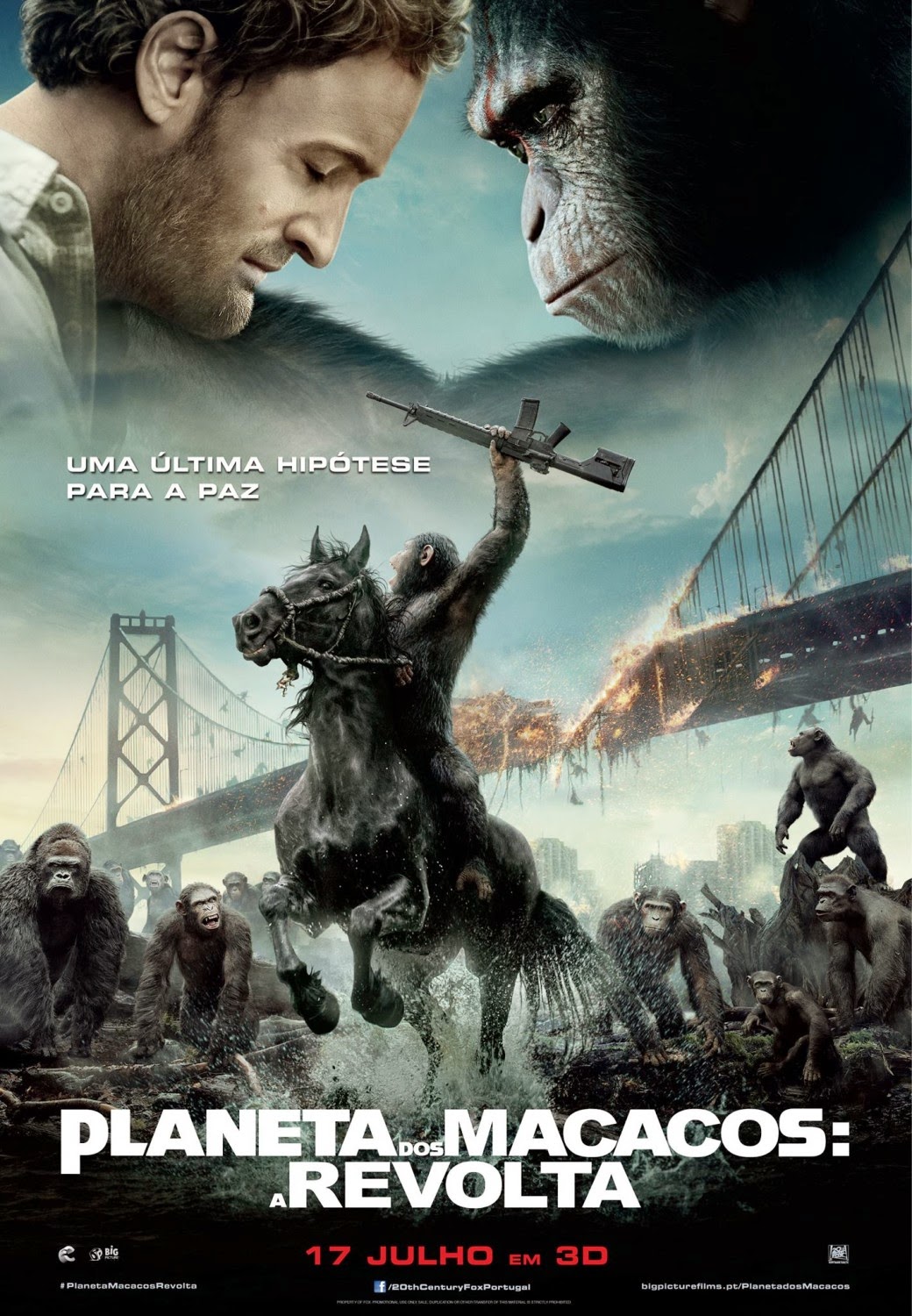 “Dawn of the Planet of the Apes” arrives next week on the heels of a fantastic looking trailer and extremely positive early buzz. In preparation to what could end up being the “Empire Strikes Back” of “Planet of the Apes” films, let us take a look back at the previous entries into this storied franchise featuring our great ape brothers and sisters.
There is an entire universe of material to explore in preparation for “Dawn of Planet of the Apes”, including action figures, lunchboxes, a live action television series, an animated show, and an outstanding new “Dawn” prequel novel, “Firestorm” by Greg Keyes. But it all starts with the films.

“Planet of the Apes” (1968)Directed by Franklin J. SchaffnerScreenplay by Michael Wilson and Rod SerlingBased on the novel “La Planète des singes” by Pierre Boulle
Released during one of the most transformative years in world history, “Planet of the Apes” was one of three science fiction classics released in 1968 (along with “2001” and “Barbarella”) that forever changed cinematic history. Charlton Heston’s powerful presence, Roddy McDowell and Kim Hunter’s great performances, Jerry Goldsmith’s avant-garde score, John Chamber’s revolutionary make up effects—“Planet of the Apes” features one iconic moment after another and has etched its mark into our collective memory and thepop culture fabric as a forever classic.

“Beneath the Planet of Apes” (1970)Directed by Ted PostScreenplay by Paul DehnStory by Mort AbrahamsBased on characters created by Pierre Boulle
A rehash of the first film combined with a bizarre storyline about a group of mutant telepathic humans who pray to an atomic bomb and featuring a grudging cameo appearance by Charlton Heston, “Beneath” is the weakest film in the entire franchise. But still, there is some great stuff here. An atonal soundtrack by Leonard Rosenman that is even more avant-garde than Jerry Goldsmith’s classic, the hippie protest scenes are priceless, and there is just an overall weirdness that gives this entry an irresistible cult film vibe.

“Escape from the Planet of the Apes” (1971)
Directed by Don Taylor
Written by Paul Dehn
Based on characters created by Pierre Boulle
Screenwriter Paul Dehn came on board the franchise for “Beneath” and went on to write all of the sequels. He is in many ways, the true auteur of the original classic franchise and beginning with this film (where Cornelius and Zira escape from the atomic explosion at the end of “Conquest” by traveling back in time via astronaut’s ship), he created one of the most fascinating time loops of any franchise. Although this entertaining movie is considered to be the “comedy” of the series, “Young and the Restless” soap opera star Eric Braeden gives a chilling performance as the villain.

“Conquest of the Planet of the Apes” (1972)Directed by J. Lee ThompsonWritten by Paul DehnBased on characters created by Pierre Boulle
Dark, haunting, emotionally affecting, and shockingly effective and convincing despite a miniscule budget of only 1.7 million (compared to 5.8 million for the original). Much like “Rise of the Planet of the Apes” (2011), “Conquest” tells the origin story of Caesar. The filmmakers made great use of the then futuristic looking, brand new Century City shopping complex. There is a wonderful, creepy, Orwellian feel to this story. Ricardo Montablan is fantastic as Caesar’s owner/friend and Roddy McDowell gives his greatest “Apes” performance. Jazz fusion saxophonist and arranger Tom Scott composed the minimalistic, atonal score. Acclaimed novelist John Jakes wrote a terrific novelization of Paul Dehn’s screenplay with the original, darker ending.

"Battle for the Planet of the Apes" (1973)
Directed by J. Lee Thompson
Screenplay by John William Corrington and Joyce Hooper Corrington
Story by Paul Dehn
Based on characters created by Pierre Boulle
If “Rise of the Planet of Apes” (2011) is kind of sort of a re-imagining of “Conquest of the Planet of the Apes”, then “Battle” is more or less the antecedent of “Dawn of the Planet of the Apes” (2014). “Conquest” was able to overcome the paltry budget through clever location shooting and spot on performances. But “Battle” is—well—a battle—and demanded more of an epic approach not possible with the shoestring budget. Still, the filmmakers did the best with what they had to work with and were helped out immensely by another great Roddy McDowell performance. An entertaining film that works well as a children’s movie. Science fiction author David Gerrold wrote an outstanding novelization of the screenplay.

“Planet of the Apes” (2001)
Directed by Tim Burton
Screenplay by William Broyles, Jr., Lawrence Konner and Mark Rosenthal
Based on characters created by Pierre Boulle
This long-gestating “remake” is despised by many “Apes” fans—and with good reason. The script is nonsensical, the ending inane, and there is something just not cool when a movie whose theme is the immorality of exploiting another species—actually exploits the species in its title! On top of all of this, the movie simply does not feel like a “Planet of the Apes Movie”. That being said, there is much to like about the film. The art direction is gorgeous (it is a Tim Burton movie after all), Helena Bonham Carter is terrific, Danny Elfman’s muscular score is one of his best, and the great Rick Baker once again sets a new standard for physical in-camera makeup/creature effects.

“Rise of the Planet of the Apes” (2011)
Directed by Rupert Wyatt
Written by Rick Jaffa and Amanda Silver
Premise suggested by “Planet of the Apes” by Pierre Boulle
When “Rise of the Planet of the Apes” premiered on August 5, 2011, it caught everyone off guard who was expecting a cynical attempt to cash in on a dormant franchise with golden brand name recognition. Instead of an exploitive popcorn flick, director Rupert Wyatt and screenwriters Rick Jaffa and Amanda Silver delivered an instant, modern classic featuring an unforgettable main character, Caesar, brought to life in a knockout performance by Andy Serkis, with flawless special effects by Weta Digital of “Avatar” and “Lord of the Rings” fame.
Despite the state of the art (and stunning) visuals, “Rise of the Planet of the Apes” is a throwback film. It is under two hours long, an extreme rarity in today’s marketplace of bloated, over stuffed movies with multiple false endings. On the contrary, “Rise” is a tight, fast paced beautifully shot and staged film. It is an emotionally rich, character driven story that harkes back to the days of Spielberg’s humanistic approach to science fiction in “Close Encounters of the Third Kind” (1977) and “E.T.” (1982).
At its heart “Rise” is a love story about family and the relationship Caesar has with his human father Will, grandfather Charles, and mother Caroline—and the tragedy of how he lost them.

Lana Del Rey’s artistry lives in ‘Shades of Cool'
The rise of Eva Green
A top twenty favorite films list
Exciting ‘Dawn of The Planet of the Apes’ trailer promises emotion, character
Jack Bauer, ‘24’ get to ‘Live Another Day’
Posted by James J. Caterino at 3:47 PM