'Dawn of the Planet of the Apes: Firestorm' outstanding prequel novel 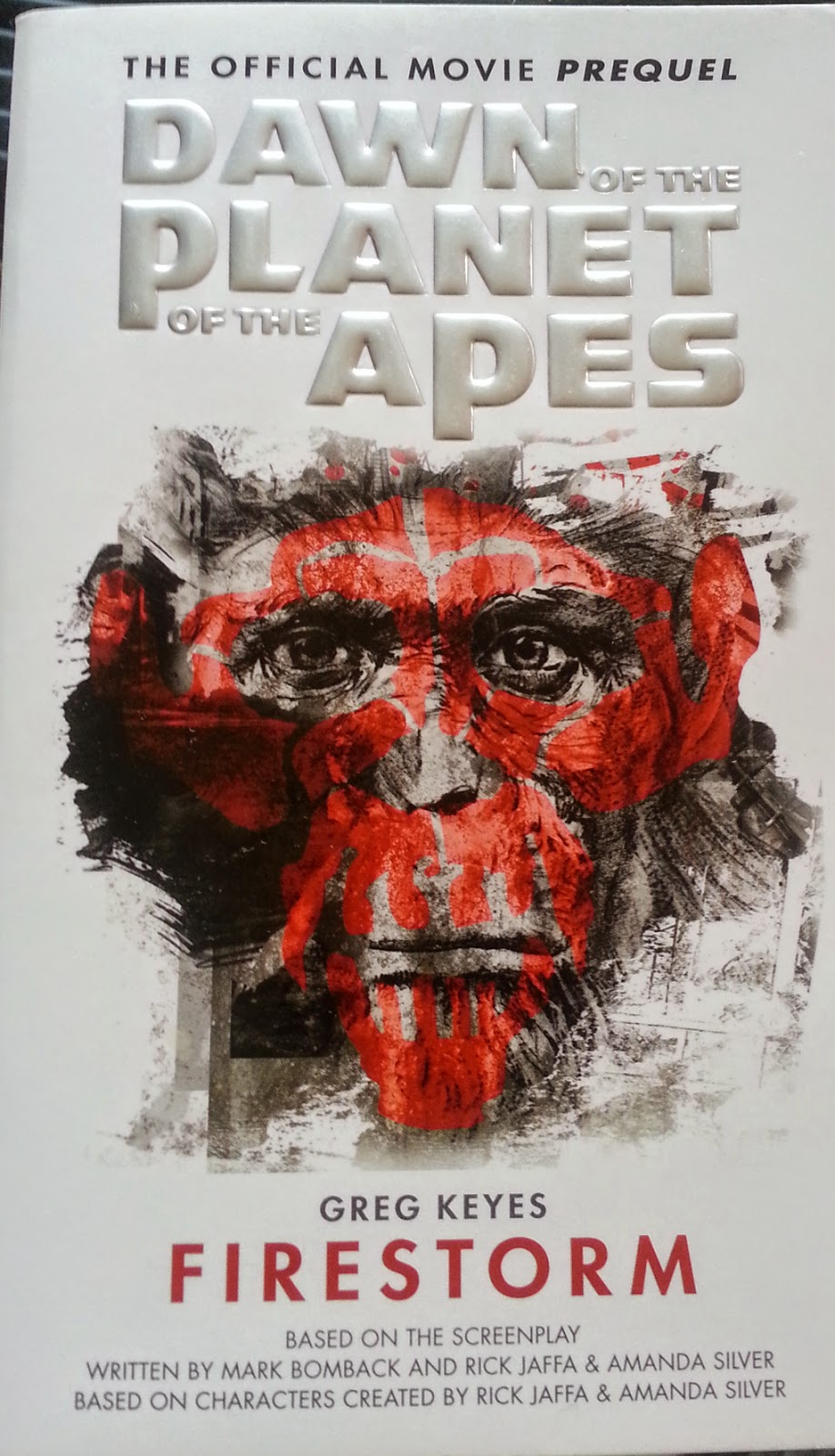 “Dawn of the Planet of the Apes: Firestorm”The official movie prequel novel by Greg Keyes
Disclosure: “Rise of the Planet of the Apes” (2011) is my favorite movie of all time and “Planet of the Apes” (1968) is my sixth favorite, so this is not exactly an unbiased review. But being a fan is a double edged sword that brings with it the baggage of huge expectations. I am pleased to report “Firestorm” met those expectations. This book not only serves as a great primer for the new sequel movie “Dawn”, it works as an exciting science fiction novel that anyone can enjoy.
“Firestorm” picks up right after the events of “Rise of the Planet of the Apes”, not long after Caesar and Will had their emotional “E.T.”-esque good-bye scene in Muir Woods. Events unfold rapidly as the deadly retro-virus ALZ-113 explodes across the human population, sending San Francisco (and the rest of the world) into chaos. Meanwhile, the corporation who created the virus, (Gen Sys), hires a shadowy black-ops organization to erase the truth and clean up any and all loose ends, including Caesar and his troop of apes now trying to live peacefully in Muir Woods. The pace is furious, a lot happens, and still author Greg Keyes finds a way to seamlessly develop a whole host of characters. This is a book packed with action and suspense but never at the expense of character or emotion.
The writing is quite impressive. Keyes smoothly transitions between several narrative viewpoints, including that of a former a Police Chief named Dreyfus, who will be played by Gary Oldman in “Dawn” and be the film’s main antagonist. Two human female characters are particularly well done; an anthropologist, Clancy, and an emergency room doctor, Talia. We really get to know these characters with a limited amount of word count. This is strong, tight writing at its best.
Where the author really succeeds is when writing from the apes view point. Some may feel there is not enough Caesar in this novel, but this book really focuses on the broader, epic story. There is plenty of Caesar, and all of it beautifully done. But the ape who gets the most “screen time” in this book is Koba. The chapters and passages written from Koba’s viewpoint are artfully done. While the writing is mesmerizing, it is often very upsetting, to the point of being hard to read.
Koba is the bonobo chimpanzee with the scarred/blind eye from “Rise”. He was the one who looked like he had been through hell and was given the retro virus ALZ-113 mist and wrote “Jacobs” name on the screen after. In “Firestorm” we learn all about Koba’s backstory and what happened to his eye. Koba’s story is sad, infuriating, and quite graphically portrayed. As is the back story of Malakai, a former poacher turned mercenary. Some of the scenes are hard to take, but tragically, they are realistic. The backstories of real life great apes rescued from the entertainment industry, labs, and abusive private owners by wildlife organizations and sanctuaries are full of horrific tales of heartbreak. As Dr. Zaius said in the original 1968 film, “Man is evil.”
The author is working with a sense of purpose here and both characters and their stories have an arc that contributes immensely to the story. And I appreciate the author (who has a Master’s Degree in Anthropology) not sanitizing the material. Because when people know the truth (good, decent humans anyway), they might work to try and change things, and maybe think twice about chuckling at the toddler chimpanzees in that Super Bowl commercial.
Bottom line: “Dawn of the Planet of the Apes: Firestorm” is one of the best movie/television tie-in novels I have ever read. It is a fast-paced, graphic, violent, emotionally affecting story with vivid, tight writing. “Firestorm” is a mesmerizing, page turning novel and a must read for any “Planet of the Apes” fan, or anyone who enjoys well-crafted, action packed, character-driven science fiction.