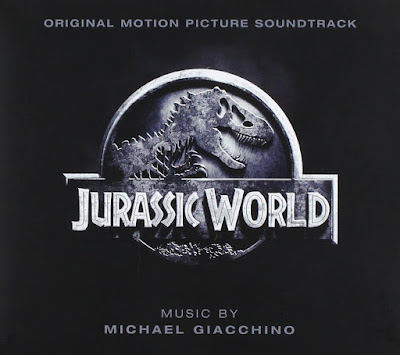 After giving us the best score of 2014 (“Dawn of the Planet of the Apes”), Giacchino started out 2015 with perhaps his greatest masterpiece to date, “Jupiter Ascending”. Then he took his “Super 8” sense of wonder to next level with a gorgeous score for “Tomorrowland”.  And now he has topped the romanticism of “John Carter” and the action/suspense music from “Star Trek” and “Land of the Lost” with a soaring, action-packed, immensely entertaining soundtrack for “Jurassic World”.

Even in the midst of this intense, prolific MVP year where we will see as many as six new films with scores by Giacchino, it is nice to know the composer has maintained his quirky sense of humor by continuing his unique tradition of naming cues with jokey titles filled with bad puns.

The soundtrack album opens with “Bury the Hatchling”, a “Lost” style scary suspense cue deftly incorporating John William’s  brass licks and a haunting chorus. Next the composer introduces us to his B theme, “The Family That Strays Together”, a beautiful melody very much in the mode of the theme for Alice (Elle Fanning’s character) in “Super 8”. Next, the composer continues to stoke the mood and build atmosphere with a bold and brilliant statement of the classic John Williams theme in “Welcome to Jurassic World”.

Then, the ever improving, super-talented composer puts on a confident display of his own main theme in “As the Jurassic World Turns”. And good god what a theme it is! The is the Giacchino theme those of us who grew up on John Williams/Jerry Goldsmith/James Horner have been waiting for; a soaring, elegant, powerful, moving, emotion-packed, fully-developed composition that moves and twists and turns and flies and inspires and makes you feel. Then the composer seamlessly transitions back into William’s theme and ends the cue with a bang.

These first four cues alone are more great music then we get on almost any other new soundtrack these days. 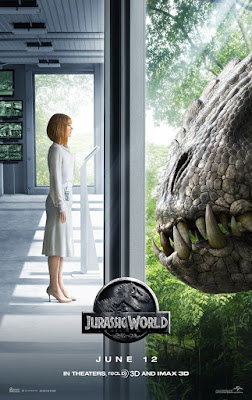 And it just keeps getting better as the composer antes up the colorful excitement in pulse pounding action cues such as “Clearly His First Rodeo”, and the wickedly entertaining suspense track turned thunderous action blast, “Indominus Rex”.

“Gyrosphere of Influence” is a creative and playful rendition of the main theme before transitioning into a haunting suspense cue. “Pavane for a Dead Apatosaurus” is the emotional music for the moving scene where Owen and Claire come upon an injured Apatosaurus. “Fits and Jumpstarts’ is a beautiful statement of the B “Family” theme before morphing in a jaunty action track “The Dimorphordan Shuffle”.

The soundtrack continues to build propulsive momentum on both a visceral and emotional level. Giacchino has now elevated his craftsmanship where he knows how to finish a soundtrack in much the same way as Williams or Horner, by carefully building toward an orgasmic musical crescendo that restates all of the scores main themes and motifs and ends the soundtrack on a soaring emotional high.