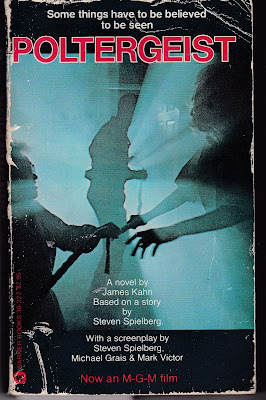 My novelization binge continues with “Poltergeist” written by James Kahn, one of the all-time best at this particular specialty, with “Return of the Jedi” and “Indiana Jones and the Temple of Doom” among his credits.

Erase all thoughts about the insipid, half-baked, cynical cash grab bastardization “remake” currently infesting movie theaters around the world. I am talking here about the Steven Spielberg produced/Toby Hooper directed classic from the fabled summer of 1982. Ahhhh….to have been there back on June 4th 1982 and witnessed this spellbinding horror film when it first opened—it was an exhilarating experience that I will never forget.

And given the visual nature of the picture, the outstanding (and nuanced) performances, the special effects (which still look fantastic and resonate today)—not to mention an absolutely monumental musical score by Jerry Goldsmith—attempting to turn the cinematic experience of “Poltergeist” into a workable and exciting novel would seem to be a futile, if not downright impossible task.

And yet, author James Kahn (working from a screenplay by Steven Spielberg, Michael Grais, and Mark Victor), has done just that.

I am happy to report that James Kahn’s novelization of “Poltergeist” knocks it out of the park on all three accounts. Reading this book is like living inside the world of the film. We get some great character insights, especially when it comes to Tangina (“Children, Children”) and the paranormal investigators, most notably Doctor Lesh. Although there is no way to duplicate with words the soul-stirring combination of the movie’s visuals coupled with Jerry Goldsmith’s powerhouse soundtrack, this novel has a sense of wonder and is downright scary! Even the show-stopper set pieces such as the “Stairway of Souls” and “Into the Light” are effectively rendered in this thrilling novelization.

Bottom line: “Poltergeist” is a rousing novelization that effectively captures the other-worldly horror and wonderment of the classic 1982 film.