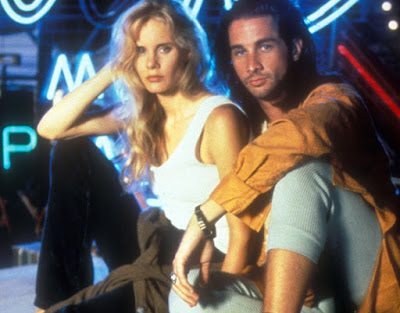 Perhaps no two buzz words sum up the technology of the 1990s better than “virtual reality”. Despite the exotic sound of that term, the inherent coolness of the technology associated with it, and the exponential explosion of the real life internet at the time—Hollywood failed miserably whenever they tried to capitalize on the trend.

Actually there were there were three brilliant virtual reality films in the early 1980s, long before anyone knew what the hell the term meant. “Tron” (1982), “Videodrome” (1983), and “Brainstorm” (1983). These movies were years (even decades) ahead of their time.

In the midst of all of that there was an ambitious new science fiction television series that premiered in the spring of 1995 on FOX called “V.R. 5”.

“V.R. 5” is the story of a brooding, brilliant (and beautiful!) computer geek named Sidney Bloom (Lori Singer) who discovers she has an ability to enter a virtual reality world and interact with real people with real world consequences. This unique skill attracts the attention of computer scientist and virtual reality pioneer Frank Morgan (Will Patton) who represents a shadowy organization known only as “The Committee”.

The show has a wonderful, unique visual style that merges music video aesthetics with film noir techniques. The result is a very cinematic look. No doubt this is influenced by the unparalleled success of another genre show that was taking the world by storm in 1995, “The X-Files”. But series cinematographer Anthony R. Palmieri and production designer Nina Ruscio give “V.R. 5” a singular look all its own, especially when it comes to the virtual reality sequences.

When Sidney jacks in (to use the vernacular of the day) and enters a virtual reality world, it is very effectively realized. The effect was achieved by shooting on black and white 35 mm film and then individually hand-painting the colors frame by frame. A pain-staking (and expensive!) process to be sure, but it pays off big time. Unlike so many other bland-looking CGI oriented 90s science fiction shows (“ST-TNG”, “The Outer Limits”, “Babylon 5”, etc.”), “V.R. 5” looks fantastic and very cinematic. The style might be described as gothic music video noir.

And speaking of music. The haunting score by John Frizzle is ethereal, suspenseful, and moving. It works here every bit as effectively as Mark Snow’s music does in the “X-Files”.

Of course, because this is a post-“The X-Files” show, there is an over-arching conspiracy story, and it is a good one. What especially works here are the flashbacks to Sidney’s past. Like Maulder in “The X-Files”, she is haunted, obsessed, and driven by a childhood tragedy—the loss of her twin sister in a drowning accident after a car crash. What really happened the night of that accident, is at the heart of the show’s mystery. 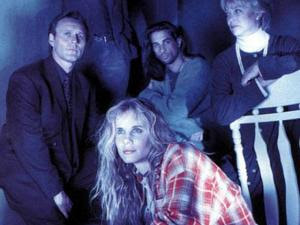 Cool visuals, haunting music and a solid story are all nice and good, but meaningless unless you have a strong lead to carry a show like this, and “V.R. 5” has a great one. Today Lori Singer is better known as a world-renowned cellist than as an actress. The statuesque blonde has the just right mixture of awkward geekiness and restrained, luminous beauty. She is outstanding as Sidney Bloom. She is believable as someone super smart. She is beautifully understated in her performance and the character is sympathetic. We sense her sadness and her demons. We root for her and we care about her. 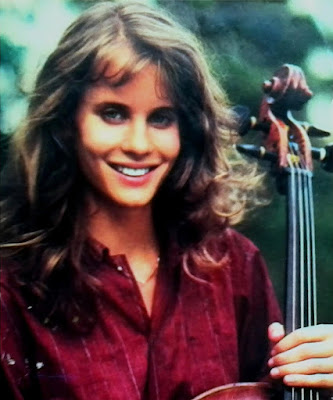 But sadly, FOX was not so sympathetic and did not care for the character nor the show. Despite being the Friday night lead in for “The X-Files”, the network never promoted the series and abruptly canceled it after ten episodes (not even bothering to broadcast two of the three remaining). “V.R. 5” vanished from reality before anyone actually knew it was on the air. The show has been all but forgotten for the last 20 years. It is not on DVD and cannot be found streaming at Hulu, Netflix, Amazon, or anywhere else. The show is “The Fantastic Journey” of the 90s.

Thanks to a gracious fan, several of the episodes can be found on YouTube and the videos are still up there as of this writing. It is all we have and the only evidence that a show called “V.R. 5” once existed.
Posted by James J. Caterino at 3:23 PM