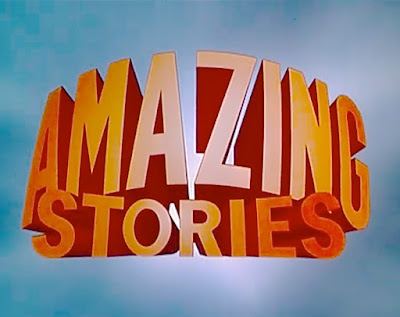 But perhaps most important of all, I wanted to pick a series that is long overdue for a re-examination—one that perhaps did not get a fair shake the first time around from either critics or fans. Two recent examples of shows like this are the underrated “Revolution”, mishandled and abandoned by NBC because it was produced by another production company, and “Caprica”, rejected by fans for not being a clone of “Battlestar Galactica.”

Maybe I will take on those two shows some time in the future, but for now I wanted to go back a bit further in time, and given the recent “Fantasy Island” and “Outer Limits” binge I have been on, I was leaning toward an anthology.

The show I have chosen to blog about and do a weekly episode by episode review of is “Amazing Stories”.

For those of you too young to remember parachute pants or The Human League—or perhaps preoccupied with actually living life back in 1985—here is the backstory on “Amazing Stories”. 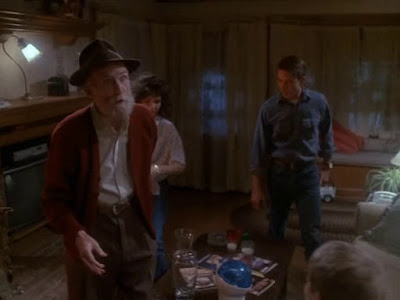 One of the most hyped pop culture television events of the 1980’s, "Amazing Stories" was created by Steven Spielberg and premiered on NBC in September 1985 with the 30 minute episode "Ghost Train", directed by the man himself. Critics were absolutely savage. I still recall Rona Barret on Entertainment Tonight raging angrily—railing against the director, accusing him of "showing off" his technical skills with a tracking shot (masterfully executed by the way) and other flashy cinematic flair.

What really seemed to piss off the media (and the television industry in general) was the fact that Spielberg’s Amblin Entertainment was given a two year 44 episode guaranteed contract. Which is exactly what I would do if I was the most successful filmmaker of all time. History, and recent history—especially when it comes to genre shows—proves time and time again a broadcast network will fuck you over any chance they get. So it was the smart move creatively to protect the show. But this guaranteed contract also guaranteed a relentless drubbing from resentful, bitter critics throughout the series’ two year run, especially when the show was getting its ass kicked in the rating by that infallible television juggernaut, CBS’s “Murder She Wrote”. 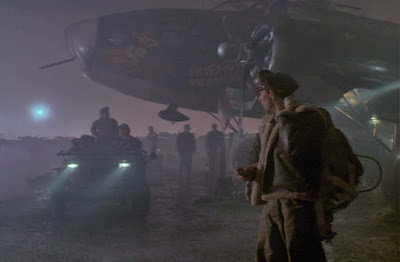 At this point history, the beginnings of a serious Spielberg backlash were emerging. Remember, “E.T.” had taken the world by storm in 1982, played in first run theaters for over a year, and had just been re-released in the summer of 1985. “Back to the Future” was the number one box office smash of the year and “The Goonies” was already developing a serious cult following among children and young teens. Although neither “Back to the Future” or “The Goonies” was actually directed by Spielberg, his name was still above the title, and nobody outside of hardcore film buffs knew who Robert Zemickis or Richard Donner were.

Add to that the uproar over the previous year’s controversial “Gremlins” and “Indiana Jones and the Temple of Doom”, and the absolute outrage among film and literature snobs over the fact Spielberg was directing an adaption of “The Color Purple”, and you have the perfect storm brewing for a vicious Spielberg backlash that lasted until 1993 when the director once and for all (mostly) silenced his critics with the one-two punch of “Jurassic Park” and ‘Schindler’s List”.

So the stage was set in the fall of 1985 for something to bear the initial brunt of all of this venomous resentment that in some Hollywood circles had been building from a decade earlier when the then 27 year-old wunderkind created the modern blockbuster with “Jaws”. Unfortunately, that something became “Amazing Stories”.

As a result of all of this history, a false narrative about “Amazing Stories” developed—a narrative that continues until this day. So let us set the record straight.

Perhaps the greatest falsehood perpetuated about the series was that the writing was atrocious and all of the stories terrible, and the show was just excruciatingly awful.

To put it bluntly, this is simply bullshit. 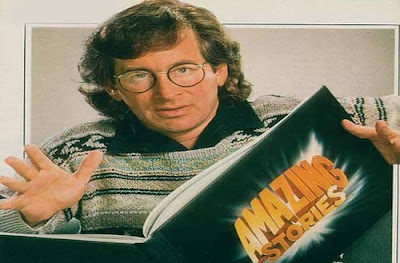 While “Amazing Stories” falls short of the 1960s classic anthologies of the original “The Twilight Zone” and “The Outer Limits, it is far superior to the any of “The Twilight Zone” reboots or glut of late 80s early 90s syndicated anthologies (“Tales From The Dark Side”, “The Hitchhiker” etc.). Overall, I would put “Amazing Stories” on par with late 90s/early 2000s “The Outer Limits” reboot or Rod Serling’s “Night Gallery”; uneven, but brilliant on occasion, and always interesting and entertaining.

“Amazing Stories” featured writers such as “Back to the Future” co-scribe Bob Gale (one of the best screenwriters of all time IMO), Mick Garris (whose episode “The Amazing Falsworth” won an Emmy for God’s sake!), Menno Meyjes (an Oscar nominated screenwriter), Michael McDowell, Anne Spielberg, and one of the three greatest television genre writers of all time, (along with Rod Serling and Harlan Ellison), Richard Matheson. Matheson also served as the show’s second season story editor.

The talent behind the camera in the director’s chair reads like an all-star team. Each episode was literally a piece of innovative short filmmaking. The series brought cinematic techniques to the small screen with young talents like Phil Joanua and Lesli Linka Glatter, as well as A-list directors such as Robert Zemeckis, Joe Dante, Martin Scorsese, and Clint Eastwood, Kevin Reynolds, Tobe Hooper, Danny DeVito, Peter Hyams, Bob Balaban, Brad Bird, and many more. 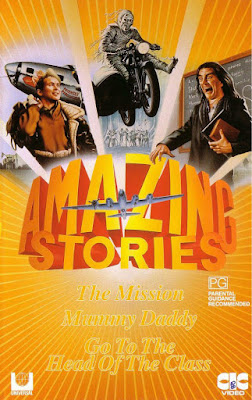 Outside of a few episodes I owned on Laser Disc, I have not seen most of “Amazing Stories” since its initial run in the mid-80s. So I am really looking forward to this blog series, and hope you will join me over the next 45 weeks or so as I take a look back at this often overlooked and underrated anthology series from the 1980s.