Up from the depths, "Fathom" Volume 3 review 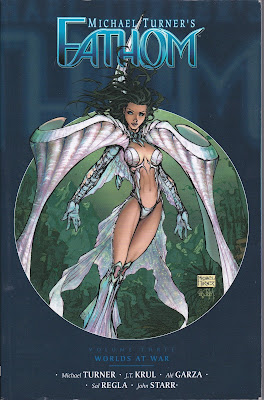 The comic book “Fathom” debuted in 1998 amid a wave (no pun intended) of acclaim and popularity. “Fathom” creator Michael Turner’s gorgeous renderings of “Witchblade” had earned him a sizable and enthusiastic fan base and this new creator-owned book was the ultimate vehicle to showcase his unique talents, as well as that of inkers Joe Weems and Sal Regla, and colorists Jonathan Smith and Peter Steigerwald.

The talented young artist’s new creation was embraced by the comic book world and even the main stream. At one point there was even talk of a major motion picture event involving none other than James Cameron! It is easy to understand why Cameron was attracted to “Fathom” because it shares many elements with “The Abyss” (1989) as well as “Avatar” (2009).  Actually, considering that Hollywood pretty much adapts everything comic book or graphic novel related, I am shocked nobody has yet made “Fathom” into a movie. Because in the right hands, it would be amazing.

Yes, “Fathom” features absolutely stunning artwork, images that will bath over you and entice you to look at then over and over and keep staring in wonderment.  But here is the thing, “Fathom” is a lot more than pretty pictures. It also features a strong, emotionally involving storyline written by Michael Turner and Bill O’Neil, starring a terrific main character. 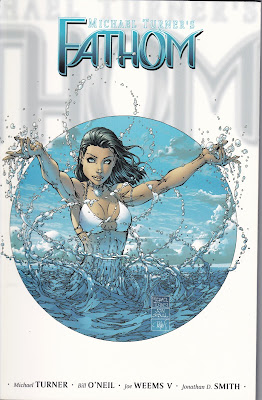 “Fathom” is the story of Aspen Matthews, a young girl who is raised by a surrogate father. Her mysterious past eventually catches up with her and she must come to terms with who she really is and her true heritage—an underwater species of intelligent humanoid creatures known as “the Blue”. Of course, when the Blue and Humans encounter each other, it does not go well. It is the “Abyss” meets “Avatar” meets “Aquaman” with a dash of “Princess of Mars”.

Sadly, Michael Turner passed away in 2008 at the young age of 37. His legacy and his company (Aspen MLT) live on, as do his characters, including the wonderful Aspen. But I shied away from reading volume 2 of the “Fathom” series (circa 2004) since Turner was not drawing it himself. To me it was like reading a “Conan” book not written by Robert E. Howard or a “Tarzan” not penned by Edgar Rice Burroughs. Turns out to be my mistake. Copies of the trade paperback collection of “Fathom” volume 2 are impossible to find, unless you want to pay several hundred dollars!

But, having just read The New 52 “Aquaman”, I was in the mood to revisit the character of Aspen, so I took a chance and picked up a copy of the widely available Volume 3. And I am glad I did. I fully expected the book to look beautiful and it does. No, Alé Garza is not as good as the late, great Michael Turner, but he is an outstanding artist in his own right and really captures the essence of Aspen and the other characters. The colors are mind-blowingly amazing and the layouts beautiful. The book is gorgeous and I fully expected that. But what I did not expect, what really blew me away, was the strong story written by Michael Turner and J.T Krull.

Fathom Volume 3 focuses on an ideological civil war between two different factions of the underwater humanoids—the Blue and the Black. The Blue, realizing staying hidden beneath the seas is no longer an option now, seek to negotiate a peaceful co-existence with the humans. While the Black are the purists, who see the humans as a dangerous advancing threat that must be destroyed. The Black are led by Kiani, another great character who is the dark side of Aspen. 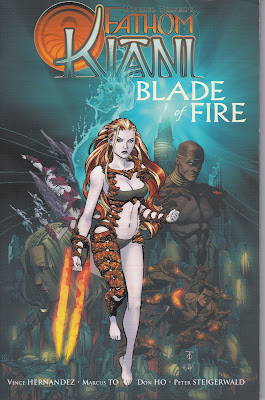 The humans also have ideological divisions and the way the political subtexts are set up is quite complex and utterly fascinating, particularly given so many of the recent temporary political debates where any attempts to negotiate is often derided as “appeasement”, a loaded term referring to Neville Chamberlain cowering to Hitler before WWII.

In the middle of all this saber rattling and war mongering there is Aspen, who is part Blue, part Black, and raised by humans. She is literally a part of all three worlds. In some ways, the story here reminded me of the brilliant 2014 film, “Dawn of the Planet of the Apes,” where Caesar, had emotional ties to both the human and ape world.

Bottom line: If you love beautiful artwork, mermaid stories, DC Comics Aquaman, or the 1989 movie “The Abyss”, then “Fathom” Volume 3 is something you will enjoy.
Posted by James J. Caterino at 7:47 PM