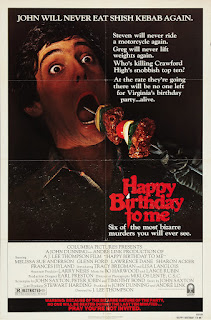 Somehow I missed Happy Birthday to Me when it opened in theaters on May 15th 1981. Which seems odd in retrospect, since I used to go to the movies about twice a week back then and was well aware of the film due to Columbia Pictures’ effective marketing campaign famous for that lurid poster art of a dude getting impaled by a shish-kebab.

Maybe it was the booming social life I had at the time. Maybe I was just burned out on the genre (there was literally a new slasher film in the theater every week back then). Or maybe the previews showing the meathead getting offed on the bench press hit too close to home since I had just suffered a real life bench press accident of my own (ouch!).

But whatever the reason, I managed to miss the theatrical run of Happy Birthday to Me, even though it’s a film I really wanted to see. Then came the disastrous home video release of the movie where they could not get the copyright for the film’s score and songs so they stripped out the soundtrack and imposed a cheesy (and dreadful) score upon the movie. So as a movie purist and a film music fan, that was an absolute deal breaker. No way would I view and listen to such an abomination.

Then, at long last, the film was restored to its original form and soundtrack, so I could finally see the movie I had been missing out on over all these years.

Happy Birthday to Me has garnered a reputation as being a cut above (no pun intended) its early 80s slasher brethren. This is due to three reasons. The budget. The director. And the cast.

The movie’s budget of 3.5 million (just under 10 million on 2020 dollars) is three to four times that of a typical slasher movie of the time. As an example, Friday the 13th Part II which had opened in theaters just two weeks earlier, had a paltry budget of 1.2 million and the original Friday the 13th was $550,000.

Happy Birthday to Me really scored with its director. Veteran director J. Lee Thompson was an old school Hollywood veteran whose credits include The Guns of Navarone (1961), Cape Fear (1962), and Mackenna’s Gold (1969). 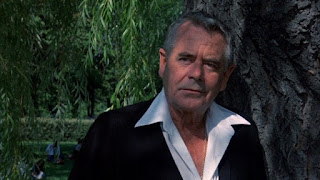 Taking the supporting role is another old school Hollywood hand, Glen Ford, a highly regarded actor at the time. And in the lead, playing against typecast, was Melissa Sue Anderson, who was well known for her starring role in the long running hit TV series Little House on the Prairie. 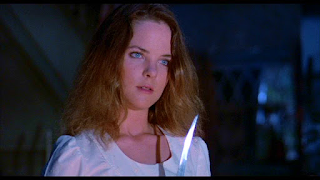 All of this—the budget, the director, the casting—pays off because it can all be seen right there on the screen. Happy Birthday to Me is a well-directed, slickly produced, and for the most part, a very well-acted piece of early 80s cinema.

Melissa Sue Anderson plays Virginia "Ginny" Wainwright, a pretty girl at an exclusive high school academy where she hangs out with a cast of characters that could be straight out of any other genre movie of the day.

But what makes this movie different is Ginny herself. There is a dark mystery in her recent past, a tragic accident where she lost her mother, and much of her memory.

Glen Ford is her psychiatrist and mentor who is helping her deal with the memory loss and cope with this tragedy.

Meanwhile, Ginny’s friends begin to disappear one by one.

Truth be told, the murders looked far more creative and gratuitous in the trailer and TV spots than they are in the movie itself. Happy Birthday to Me is more straight horror film mystery thriller than a slasher movie. It does not possess the lurid thrills of say, Friday the 13th Part II.

But still, this is a good movie. And I’ll go a step further. This is a really good movie that occasionally flirts with greatness, especially during the absolutely bat shit crazy insane final act.

Melissa Sue Anderson commands the camera. She makes you want to watch her and learn more about what is going on inside her. Ford is solid and lends some gravitas to the film. And that now legendary restored score by Bo Harwood and Lance Rubin drenches the proceedings with great tension and atmosphere.

A real horror gem from the early 80s slasher wave featuring a strong performance from Melissa Sue Anderson and a great musical score.