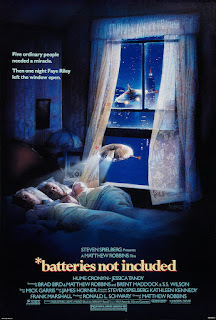 In this book you get the *The Batteries Not Included triple crown. Reviews of the film, the novelization, and the soundtrack.

Can you tell I have a fondness for this late 80s heartfelt gem from Amblin Entertainment, director Matthew Robbins, and his team of screenwriters, Brad Bird, Bent Maddock & S.S. Wilson, and story originator Mick Garris?

Batteries tells the story of group of tenants in a rundown vintage apartment building, each of them down on their luck, each of them hitting rock bottom. Each of them with nowhere else to go. And if life hadn’t beaten them down enough, they now have to contend with a real estate kingpin named Lacey, who has hired local thugs to try and muscle them out of the only home they know (think Donald Trump 1987, before he became a dime store Mussolini and when just a scumbag NYC conman).

The cast is anchored by Hollywood veterans and real life husband and wife Hume Cronyn and Jessica Tandy who play Frank and Ray Riley, long-time residents and owners of the first floor diner. The diner is being crushed because Lacey has leveled the rest of the neighborhood to make way for his vanity project. Faye is suffering from dementia. Both are hurting from a tragedy in the past. Things could not be bleaker.

Cronyn and Tandy are sensational as are the rest of the actors who play the lost souls of the seemingly doomed building, including gentle giant Frank McRae as a punch drunk ex-boxer, Elizabeth Peña as a young pregnant girl abandoned by her rock star boyfriend, and Dennis Boutsikaris as a painter looking for inspiration.

And inspiration does come in the form of miniature UFOs that float into Faye’s open window one night and change the lives of this group of kind-hearted people forever. Watching them pull together and rally around the new visitors as Lacey closes in, makes for an entertaining, emotionally potent movie experience.

The pre-digital visual effects by ILM are an absolute delight. As is the wonderful score by James Horner (reviewed elsewhere here). The seamless effects, Horner’s sentimental strains, combined with the strong performances and Matthew Robbin’s pitch perfect direction, make for a potent emotional cocktail. Batteries is a movie the kind of sneaks up on you. It makes you feel—in a good way.

It may not be Close Encounters or ET, but *Batteries Not Included is a sweet, unsung gem in the Amblin catalogue. It will make you feel good. I promise.