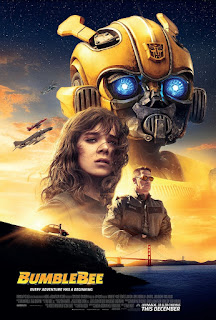 Let’s just put all the cards on table up front. No jerking around. No teasing and slowly building up to a verdict as I laboriously describe the background and the plot of the movie. No, I won’t do that because quite frankly, I hate it when other reviewers do that. So let’s get right to it.

I absolutely freaking love this movie. I adore it.

Bumblebee was written by Christina Hodson and directed by Travis Knight, and wow, did they nail it.

This movie has life. It has a glorious beating heart. It has a wonderful, carefully crafted story in the classical three act structure, reminiscent of movies in the past, when they were tight and lean instead of three hour bloated endurance tests.

It has Hailee Steinfeld who plays eighteen year-old Charlie Watson, a former teen diving star who likes to tinker around with cars in her garage.

Hailee is just amazing in this film. Right now she ranks alongside Elle Fanning as hands down the best young actress working in film today. And to boot, she is a pop star (as opposed to Elle who just played a pop star in a movie, Teen Spirit, although brilliantly so). Hailee even sings the catchy, feel-good tune that plays over a super cool end credit sequence. Like Elle, Hailee is just a natural. The real deal. She is the truth.

This movie has the charismatic John Cena in a supporting role and he is fantastic as always. Bumblebee also has one of the best portrayed 80s style moms I have seen since the days of Dee Wallace and Melinda Dillon, courtesy of Pamela Adlon who plays Charlie’s mother.

This movie is a period piece that gets everything spot on from the art direction, to the lighting, to the clothes, to the pop culture of the day. Bumblebee takes place in 1987 and feels exactly like a movie that would have been produced by Ambin Entertainment and played in theaters in 1987. Substitute optical and practical visual effects for the CGI and this is a true 1987 movie that just happened to be released in 2018.

But most of all, this movie has Bumblebee himself, the transformer from the stars who crash lands to Earth in 1987 and is befriended by a lonely teenage girl. Charlie and Bumblebee come together at a time when they both desperately need each other.

Bumblebee is a great character. The outsider, the other, in the tradition of E.T., Ed from Edward Scissorhands, Harry from Harry and the Hendersons, and Ceaser from the recent Planet of the Apes trilogy.

In addition to the cool Hailee tune at the end, the movie has an awesome, pitch perfect song soundtrack, and a wonderful, moving score by composer Dario Marianelli.

An absolute heartfelt joy. My pick for best film of 2018 and flat out one of my favorite movies.
Posted by James J. Caterino at 7:38 AM