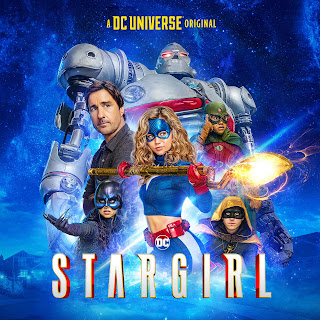 Produced by team Berlanti (Arrow, The Flash, Supergirl, Batwoman, etc,) and airing on the CW, Stargirl was created by acclaimed comic scribe Geoff Johns based on the DC book Courtney Whitmore that he co-created with Lee Moder.

I won’t play any games here. I’ll get right to it.

Stargirl is the best superhero TV series ever—by a mile. Due in a large part because it does not feel like television at all.

It is to comic book superheroes what The Mandalorian is to Star Wars. As soon as the pilot episode began to unfold across my monitor I said to myself, “Fuck yeah!”

The cinematography, the beautifully orchestrated push-ins and expertly composed master shots. And that lush, full-bodied score by Pinar Toprak. She is the composer of Captain Marvel, one of the best soundtracks in the entire MCU series.

It is all so cinematic. The other CW shows, even when they are good, feel like TV shows. Stargirl feels like a movie. I felt as if I were seated in a darkened theater watching a summer blockbuster. This may be a DC property, but it feels so much like a Marvel movie, in all the good ways. It also has a vibe similar to last year’s wonderful Shazam from DC

Then there is the cast.

It is a wonderful cast, anchored by veterans Luke Wilson and Amy Smart, and featuring Trae Romano as the wisecracking little brother.

Too often in the other CW shows, the villains are forced, cheesy, and uninteresting. The villains here are formidable. They feel real. They are intimidating and scary and we are nervous when Stargirl has to confront them.

Of course, for any of this to work you have to have the right lead. In this regard, the producers have hit a home run.

Brec Bassinger stars in the title role. She is a firecracker of a find who is born to play Stargirl in the same way Melissa Benoist was created to play Supergirl. The fit is so natural. So perfect in every way.

That is all I’ll say for now because I am only three episodes in and have two more to go to get caught up, and cannot wait to see more.

Stargirl is the real deal. A superhero show you can brag about watching. You can even recommend it to your friends who normally wouldn’t be caught dead watching a superhero show.