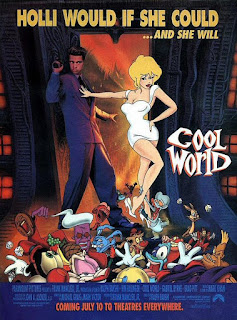 I went to see Cool World on opening night on July 10th 1992 and was jacked to see the movie for several reasons.

I was already a Brad Pitt fan by then, having seen him in a little known (and apparently never seen by anyone but me) 1991 film called Across the Tracks about two high school cross country runners who are brothers. It co-stars Ricky Shroder and Carrie Snodgress and is a wonderful, earnest, after-school-special type movie. I knew right away that Brad had it, and then after seeing him again that year in his brief appearance in Thelma and Louise, I declared to anyone who would listen that this Brad Pitt dude was the man and was going to be a major star. My predictions were validated in 1992 with Cool World (despite the film flopping) and with his electrifying turn in Robert Redford’s A River Runs Through It.

I was also psyched to see the fine actor Gabriel Byrne who had wowed me in the Coen brothers’ Miller’s Crossing in 1990. And I dug Kim Basinger as well.

Also, I was drawn to the premise and story—because I had written one just like it in 1986 called Comic Book Girl.

No, I’m not saying screenwriters Michael Grais and Mark Victor somehow got a hold of my story from my college writing Professor at Pitt or the editor of the long defunct Fantasy Illustrated magazine. I certainly was not the first person to write about a comic book creator being sucked into the world he created by an alluring femme fatale. The point is, I obviously love the concept and premise and was really looking forward to see what Bakshi, Grais, and Victor had done with it, especially given the three super talented actors they had to work with.

So, yeah, I was jacked. My expectations were high. And man oh man, those expectations were not met. Not met at all. I left the theater that night disappointed, frustrated, and annoyed. Because all the ingredients for greatness were there. All they had to do was not fuck it up.

The fault here lies with the studio. As Newman said in Jurassic Park, “Don’t get all cheap on me now.”

The studio went all cheap. They cut corners. They went at it half-ass. And when you are making a movie that completely relies on the believability of real life actors interacting with animated characters in an animated world, the last thing you want to do is go cheap and half-ass.

I mean, were the producers and the studio aware that four years earlier there was this little movie called Who Framed Roger Rabbit? A new bar had been set. Audience expectations were built in. No, you don’t have to outdo the dazzling Roger Rabbit. But you have to make it at least good enough. Good enough for suspension of disbelief.

So I gave the movie a thumbs down in my review at the time. Giving it two stars out of four. The two stars for Brad Pitt, Gabriel Byrne, and Kin Basinger. Brad Pitt is awesome. Gabriel Byrne is solid. And Kim Basinger sexy. Really sexy actually, as is her counterpart Holly, the one piece of animation in the movie that actually looks good. Most of the time. Plus, I still like the story. Just not the execution of it.

Flash forward to the present. June 2020.

I revisited Cool World for the first time since 1992. But this time the expectations are set low and the screen is my 21 inch desktop computer, not the giant curved thing at the AMC Coral Ridge 10 where I sat in the third row back in 1992.

Given all the above, this time, I actually enjoyed Cool World.

I was able to get past all the technical shortcomings and enjoy the parts of the animation that does work—the sexy Holly/Basinger stuff, and the colorful art direction.

And I was able to relish in the performances. Brad Pitts’ steely film noir character. Gabriel Byrne getting out of prison and going into a comic book shop. The fan girl neighbor of his. And Kim Basinger’s over the top femme fatale sultriness.

And I really do like the story. I always have. Since way back in 1986.

It certainly ain’t no Rogger Rabbit, but if you get past the technical shortcomings, Cool World does indeed have some cool stuff to enjoy, especially the performances of the three leads.