Harry and the Hendersons (1987) film review 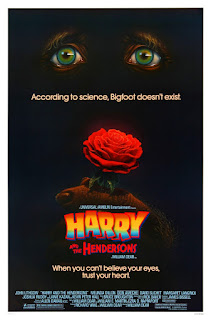 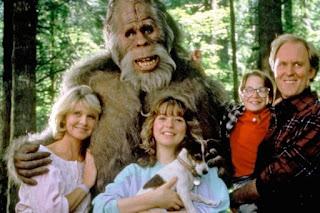 Opening on June 5th, 1987 after a mysterious E.T. style marketing campaign, it was one of the final big three swan song to the Golden Age of Amblin Entertainment; along with Innerspace and Batteries Not Included. Amblin would go on to produce all sorts of other films and television projects, but aside from the SciFi Channel (as it was called then) miniseries Taken (2002), none would have the specific Spielbergian feel of those films (and the series Amazing Stories) from 1982-1987.

Like most the Amblin films from that sacred era, regardless of how it performed at the time, Harry and the Hendersons left a mark on those who saw it and has fans to this day. But even back then, the big guy had his supporters.

No less than the esteemed Harlan Ellison wrote at the time in his column for The Magazine of Fantasy and Science Fiction (as collected in the must own book Harlan Ellison’s Watching) that Harry “is a delight. It’s manipulative as a Rocky flick, but the manipulation is in service of making us feel good, and hey, I’ll invest in that any day.”

I whole-heartedly agree and I remember experiencing that first hand in 1987.
I vividly remember seeing Harry and the Hendersons on opening night at the AMC at Adventura Mall in Miami for an eight PM Friday night show.

The near capacity crowd in the theater responded to the movie with visceral exhilaration—as did I—laughing and cheering in unison, and crying when—well that’s all you get. No matter how old the movie, I try to avoid spoilers in these reviews, at least blatant in-your-face spoilers, since many reading this were not even alive in 1987 and never saw the film. But suffice to say, the audience was all in and as the lights came up, the credits rolled, and the exuberant, emotionally affected crowd departed the theater, I was certain Harry was going to be a sure-fire monster hit. Sigh. For reasons to murky to discuss here, that was not to be.

The story and setting are pure Spielberg.

John Lithgow plays George Henderson, the ineffectual father of a dysfunctional nuclear family. George longs to be an artist but settles for working at the family business, a gun shop catering to hunters. He suffers daily at the hands of his bullying father who belittles George and mocks his artistic dreams.

Enter the outside supernatural force, this time in the form of a sweet, giant Bigfoot creature named Harry. Through his interactions with Harry and the close friendship they develop, George learns to stand up to the bullies in his life, protect those he loves, pursue his artistic dreams, and win the respect of his family.

Harry and the Hendersons may not be E.T. and writer/director William Dear is no Spielberg, but he has a keen instinct for physical comedy as well as sentiment. And thanks to a terrific performance by John Lithgow and great work by Kevin Peter Hall inside Rick Baker’s Oscar-winning make-up/creature effects suit—the film works beautifully as a sentimental suburban fable with a lot of heart.

Harry also has something important to say. About animals and wildlife and the environment, and about the tragic act of killing for sport. These were bold messages in 1987. There were not many animal sanctuaries, protected forests, or wildlife protection organizations around in 1987. This message is not ham-handed or forced or pandering, say in the way the DEO stopped using guns that one time on Supergirl. It is a subtext that is naturally woven into the script because it organically springs from the characters. Because this is a story about a creature from the wilderness, and how he changes the perspective of the family whom he befriends.

The performances in this movie are spot on, particularly Melinda Dillon as the quintessential Spielberg suburban mom, and of course, the great John Lithgow who, along with Harry, is the heart and soul of the film.

Don Ameche plays anthroplogist and lifelong Bigfoot seeker Dr. Wallace Wrightwood who has given up hope and stopped believing. Laine Kazan is hilarious as a Mrs. Kravitz type neighbor. The great character actor M. Emmet Walsh plays George’s bullying father. You could argue that David Suchet over does it as the villainous Jacques LaFleur. But he had to. This is a comedy and if he played it too straight it may have come across as to grim and sinister.

In addition the aforementioned Oscar winning makeup work by master Rick Baker, the technical aspects of the movie are impeccable.

Harry and the Hendersons features gorgeous on location filming in the Seattle area and is beautifully shot by E.T. cinematographer Allen Daviau and has an outstanding score by the super talented composer Bruce Broughton.

There is also a wonderful, bittersweet end title song performed by Joe Cocker, “Love Live On”. It is a heartfelt track that really captures the essence of the film’s sentiment. The song features the music of Bruce Broughton’s main theme and was written by Bruce Broughton and Barry Mann, with moving lyrics by Cynthia Weil and Will Jennings.

The song is heard over the super cool closing credits featuring George drawing scenes from the movie via rotoscoping animation, the technique made famous by the Steve Barron directed A-ha music video “Take Me On”.

In my initial review back in 1987 I gave Harry three out of four stars, essentially knocking off a star for no good reason other than it was not E.T. Just as I punished Batteries Not Included for not being Close Encounters. Well, as I did with the Batteries re-evaluation, it is time to correct that silly oversight.

A funny, endearing, heartfelt film with an awesome main character and wonderful work from John Lithgow.

“Love Lives On”
Lyrics by Cynthia Weil and Will Jennings