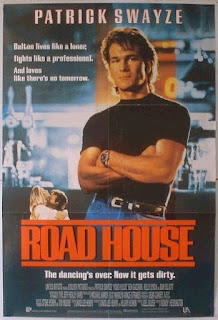 Road House, written by David Lee Henry and Hillary Henkin from a story by Henry, produced by Joel Silver, and directed by Rowdy Herrington, is an exploitation film.

I mean that as a compliment. I love exploitation films.

In the genres of horror and sex/eroticism, exploitation flicks can thrive because, with the right amount of artistic flair, it is easy to deliver scares, cheap thrills, and titillation on a low budget. Big names or even competent actors are not required because they are not expected. People are there for the sex and the horror. The cheap thrill.

But when it comes to action movies, it’s a whole different game.

Outside of Hong Cinema (where there are hundreds of awesome action exploitation flicks), action exploitation, or even the more prestigious term, action B-movies, are mostly wretched. Because action requires complicated staging, often using multiple vehicles and multiple stunt people, and a practical effects team, and even a big second unit operation. And all of this requires money, a lot of it, and expertise. And expertise costs even more money.

Plus, action movies do mandate a star. Or at least someone with the rock star charisma of a movie star.

But let’s say you could come with this cool high-concept idea—a legendary bar bouncer with a philosophy degree comes to town to take on the bad guys. Then you turn it into a really neat hybrid action/western exploitation B-movie script that pushes all the right buttons. Then, let’s say you could hook up with a big time studio connected Hollywood producer movie mogul known for making slick, glossy, and R-rated, super cool, high-concept action movies featuring A-list bigtime actors operating at the peak of their prime.

And they got their star in a big way.

Patrick Swayze was at the peak of his post Dirty Dancing (1987) rock stardom and he just oozes charismatic bad-ass-ness in this movie. Ghost (1990) may be his best performance, but this film and Point Break (1991) are the best “Patrick Swayze movies”.

This movies has it all. A fearsome bad guy, kick ass and expertly choreographed fight sequences, over the top violence, humor, gratuitous nudity, a really hot sex scene between the two leads, and some great politically UN-correct dialogue.

I mean any movie where a bad guy says to the hero during a brutal fight to the death confrontation, “I used to fuck guys like you in prison”, gets my vote every time.

What’s really wonderful is all of this over this top titillation and mayhem looks amazing because Road House was shot by one of the best cinematographers of all time, Dean Cundey. Plus, Patrick Swayze and his gorgeous co-star, the statuesque Kelly Lynch, are very pleasing on the eye. As is Patrick’s buddy, the always welcome Sam Elliot.

And the movie sounds good too, courtesy of composer Michael Kamen (a Joel Silver regular), and The Jeff Healy Band, who plays the live music in the bar.

Producer Joel Silver and star Patrick Swayze are at the top of their game in this guilty pleasure classic.