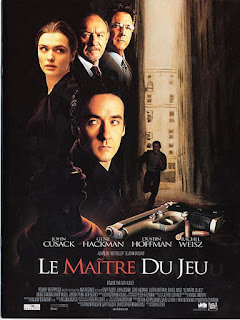 There are movie trends that end up defining certain decades, not only in cinematic terms, but in the very fabric of the pop culture itself.

The atomic horror and red scare movies of the 50s. The French New Wave of the 60s. The rise of the movie brat auteurs in the 70s. The Spielberg/Amblin productions and the John Hugh’s teen movies of the 80’s.

In the 90s it was adapting the novels of the two legendary authors of the day, Michael Crichton, and John Grisham.

With the one obvious exception of Jurassic Park (1993), Crichton’s complex, tech heavy books often ended in mixed results when adapted to film. But John Grisham novels seem to smoothly slide into ready-made Hollywood pot boiler legal thrillers such as, A Time to Kill, The Firm, The Pelican Brief, all of them featuring all-star casts and slick production values.

Everyone has a favorite John Grisham movie just as they have a favorite Stephen King movie. But my favorite Grisham adaption is not from the decade of the 90s when his legal thrillers were thriving in multiplexes everywhere. My top John Grisham flick is from 2003, Runaway Jury.

Let’s just start with the cast. A cast insane with crazy talent and legendary stardom.

You get an ultra-smooth, super charismatic John Cusak delivering a silky, effortless, nuanced performance, operating at the peak of his craft and stardom.

You get Rachel Weisz. And full disclosure here. I’ve been mega-crushing on Rachel since 1999’s The Mummy. But my bias aside, she is a flat out full-rounded talent who does it all, from playing the sexy femme fatale you would throw it all away for ( see Confidence, also a 2003 film) to delivering Oscar caliber performances ( see Denial 2016). Like John Cusak, she is at her absolute best here.

Then you have the two heavyweights.

Dustin Hoffman’s character is the aging baby boomer idealist, born of the 60’s and still fighting to hold on those virtuous values.

Gene Hackman is the ruthless, win-at-all-costs money driven gun for hire antagonist with a seek and destroy mentality. As we saw in The Quick and the Dead (1995) and Unforgiven (1992), the hardest working actor in movie history can play a formidable, imposing villain like no one else.

Another Mann directed film must be brought up here. The filmmakers of Runaway Jury were forced to change the McGuffin of Grisham’s book from Big Tobacco to the gun industry because The Insider came out in 1999 and is a masterpiece that made the ultimate and final cinematic statement on that subject. But this forced move turned out to be an advantage, making Runaway Jury way ahead of its time on assault weapons, mass shootings, and the gun lobby. As a result, this movie feels more relevant today than it did in 2003.

A word about the unsung director of this movie Gary Fleder. He shoots and stages this film effectively, and aided by his cinematographer Robert Elswit, lights the actors beautifully. Aided by another solid Christopher Young score, they really capture the flavor a pre-Katrina New Orleans.

The one criticism often leveled at this movie is an asinine one. It was said at the time of the movie’s release, and told to me by lawyer friends of mine, that Gene Hackman’s operation and jury rigging setup is unrealistic, if not downright preposterous.

Yeah I get it. The high tech, sophisticated, intrusive, frightening level of creepy surveillance executed by Hackman’s team seems straight out of a Mission Impossible movie or an episode of Homeland. But is it really that impossible? Well, certainly not today. In 2003, maybe. I dunno and I really don’t give a flying fuck. This is a movie based on a John Grisham novel and Grisham, like all great fiction writers, asks the question “what if?”

This is a movie. A really entertaining movie that also poses some questions about what kind of society do we want to live in.

A glorious piece of slick, glossy entertainment brimming with knockout performances from an All-Star cast.