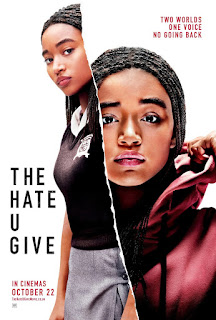 Directed by George Tillman Jr. with a screenplay by Audrey Wells and based on the book by Angie Thomas, The Hate U Give is the story of a traffic stop gone fatally wrong. It is essentially—along with an apocalyptic pandemic and the rise of a petulant tyrant to Godlike status—the story of our times.

Reviewing this movie right now (see the above date) is like grabbing a hot potato right out of the burning flame.

The movie begins with an inciting incident. A sixteen year-old girl named Starr is in the car with a lifelong male best friend of hers who is driving. They are both black. They are pulled over by a white police officer. Things go bad and Starr watches in horror as her friend dies right before her.

Let’s get right to it.

The Hate U Give should be required viewing in our time right now, in the same way that Do the Right Thing was in 1989, and Boyz n the Hood was in 1991.

No, I’m not saying that The Hate U Give is a breakthrough piece of cinema in the way that those two classics are. Because what Spike Lee and John Singleton did was show us worlds and the things happening in those worlds that nobody outside of Brooklyn NY or South Central LA had even heard about, let alone experienced. Thanks to the prevalent use of cell phone video (and now dash and body cams) going into Hate we already know about the fraught and too often lethal relationship between police and the African American community. But what the movie does do is, through the use of bold, effective, emotionally involving storytelling, take us deep inside that experience so we viscerally feel it all for ourselves.

It is all about the characters, because this is a movie about people and at the center of it all is sixteen year-old Starr, a wonderful, fully realized main protagonist played with effortless brilliance by the outstanding Amandla Stenberg, who you may remember from The Hunger Games in 2012.

Starr lives in a neighborhood not too removed from the South Central LA of John Singleton’s above mentioned classic. But she goes to a nearly all white high-end Prep School. complete with uniforms and all, thanks to her supportive and loving parents determined to give her all the opportunities they were denied. So in a sense, Starr lives in two worlds and she keeps them apart.

Even her white (and serious) boyfriend Chris, played by K. J. Apa of Riverdale, has yet to meet her family, because Starr fears, and rightly so, how her father would react to her having a white boyfriend.

See, this is a movie that is not afraid to show all sides.

There is a ruthless neighborhood gangster who is intimidating Starr into not testifying at a hearing about the shooting because her friend who was shot worked for him. It is in his best interest to leave things the way they are, so he stays off the radar and keeps control of the neighborhood.

There is Starr’s Uncle Carlos, a cop himself, whom, in a nifty piece of monologue given by Common, gives the cop’s perspective of what it is like to pull someone over, and what runs through a cop’s mind during such an encounter.

We get to see one white character bravely stand by Starr’s side when the shit hits the fan, and another abandon her because, tragically, she is a racist without even knowing it, and thus unable to face it and evolve.

This is a movie that really does show us all sides. And although it may not be showing us anything we haven’t already known about and seen play out on live TV before our very eyes, The Hate U Give takes us inside that world and allows us to experience it through vivid, fully realized characters.

And ultimately, no matter how small the sliver may be, it is a movie that offers some hope. Something we all desperately need right now.

To say that The Hate U Give is urgently relevant would be an understatement. It is also a strong, emotionally involving story, with shrewd direction and great performances.