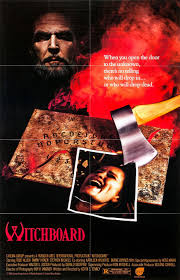 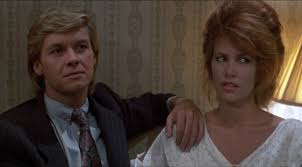 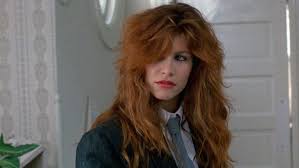 Just a house cleaning/technical thing to clear up first. You will see this movie listed elsewhere as a 1986 film. Umm, no. Yeah, it was released on fifteen screens at the last second on December 31st 1986, then promptly disappeared until its wide release on March 13th 1987. Why this happened? I have no idea. I guess they wanted it to qualify for the Oscars? Maybe hoping the Academy had added a low budget/lurid horror film category? I know. That is exactly why this is 1987 film. Full stop.

I saw Witchboard in a theater because back in those youthful days of 1987 I went to the movies two to three times a week and saw just about everything released. Even pre-Covid Apocalypse, (you know, that democratic hoax thing that was just going to go away like a “miracle” back in early March), getting my ass into the seat of the local stadium theater even once a week was a herculean task. But back in 1987…

I wanted to see Witchboard for three reasons back then. I liked horror. I wanted to lust after Tawny Kitaen, whom I was familiar with as Tom Hank’s fiancée in Bachelor Party (1984).

And I also wanted to see Stephen Nichols, one of the male leads. At the time he played a cool character named “Patch” on the daytime soap opera Days of Our Lives (hey, it’s a guilty pleasure. Don’t bust my balls). Given his command of the daytime small screen, I was curious to see if his charisma translated up onto the big screen.

And in a word, yes. It does. Stephen Nichols is quite good here, as are the other two leads. The aforementioned Tawny Kitaen, and Michael Madson look alike, Todd Allen. There is also a hilarious supporting cameo by character actress Kathleen Wilhoite.

So for a low budget horror flick the acting is quite solid. As is the direction by first timer writer/director Kevin Tenney. There are several sequences that are very creatively staged and shot, almost in a Sam Raimi kind of way. To top it all off, there is a wonderful John Carpenter-esque 80s style synth score by Dennis Michael Tenney.

Look. I judge low budget horror the way I judge low budget comedy. In the case of comedy, is it funny? With horror, is it scary? And yes, Witchboard is scary. It scared me in the theater in 1987 and creeped me out again when I re-watched it the other night on Amazon prime for this review. As the recent Ouija: Origin of Evil (2016) proved, there is just something so spooky and sinister about those damn Ouija boards.

Effective low budget supernatural horror film from 1987 that is worth another look for fans of horror and 80s cinema.