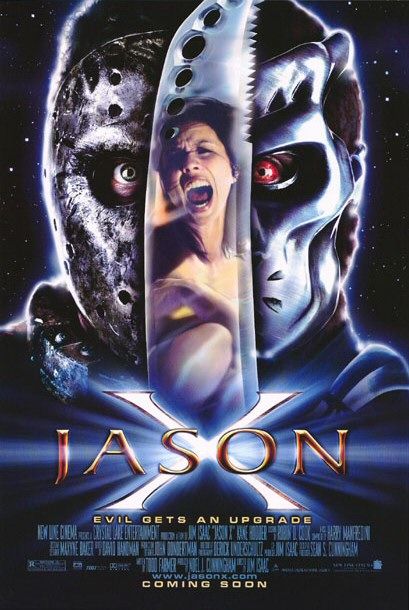 Jason X is the best Aliens ripoff movie ever made. It is also the most creative, exhilarating, and entertaining Friday the 13th movie of the entire series. Put simply, this movie is a blast.

Just so that you know where I stand on this franchise:

This original Friday the 13th (1980), written by Victor Miller and directed by Sean S. Cunningham, is a triumphant work of raw, low budget artistry, and a shrewdly effective scare show. Part II (1981), written by Ron Kurz and directed by Steve Miner, shamelessly steals from Mario Bava’s Bay of Blood (a.k.a. Twitch of the Death Nerve), and is wonderfully lurid and over the top. Part III (1982) (filmed in 3D) is okay. Movies four to nine in the series are pretty much unwatchable, with the exception of Tom McLoughlin’s Part VI: Jason Lives (1986), which is actually pretty good. But after the three wretched entries that followed, the franchise was deader than its main antagonist would ever be at the end of any film.

Several years later, enter screenwriter Jim Farmer, director Jim Isaac, and producer Noel Cunningham, who had a brand new bold and ballsy vision to re-invent the franchise and the good sense to bring the original auteur Sean S. Cunningham back into the mix (as an Executive Producer) and re-hire composer Harry Manfredini, who created the wickedly exciting and scary scores that were so integral to the success of the early films in the franchise.

The pitch? Jason in space. Think Riddly Scott’s Alien. Think James Cameron’s Aliens (1986). I know. It sounds ridiculous. It sounds inane. It sounds like the worst idea since Diet Coke or having Greedo shoot first. But trust me. It works. It all works in a big, wildly entertaining way, far beyond anything you could anticipate from such an absurd concept.

It all works because Farmer and Isacc know what the fuck they are doing. They not only understand what makes a Friday the 13th movies work—jarring suspense, sexuality, gratuitous nudity, creative kills, and most of all, humor. They also understand what makes any genre movie work in the science fiction/horror/suspense niche. The opening set piece is a perfect example. It is masterfully done.

And to top it off, they know how to put every dollar up on the screen. Jason X has a lot of visual effects and a decent budget (estimated 11-14 million) to be sure. But it looks even better than that budget.

David Cronenberg as an evil doctor/scientist who wants to keep Jason around to study/exploit him. Lisa Ryder (from the television space opera Andromeda) as a badass ship’s android, sort of a combo of Bishop from Aliens and Data from Star Trek: The Next Generation. And, in what should have been a breakout role for her, the beautiful Lexa Doig (likewise from Andromeda) as Rowan LaFontaine, the slasher “lead girl”, who desperately tries to warn every one and goes toe to toe with Jason until the very end.

I had a blast seeing this opening day back on April 26th 2002, and have watched it many times since on DVD.

Any movie with David Cronenberg and two women from Andromeda, gets my vote every time.