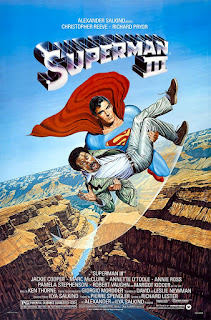 When I stepped into Cinema World on Route 51 on Friday June 23, 1983 for the 7:45 showing of Superman III, my expectations were insane. I was even wearing a Superman t-shirt, a sky blue clingy thing with a glorious 3D House of El logo stretched across my then fifty-inch chest. You must understand, back in 1983 being a geek was not cool. People got beat up for wearing t-shirts like that. But people left me alone. Like I said, I had a fifty-inch chest.

I really liked 1978’s Superman: The Movie. Not in a going crazy seeing it five times and buying every spec of merchandise kind of way. But I liked it just fine. But Superman II, now that was a different story. I went nuts over it. The spectacle. The action, The romance. The humor. And Zod. Mother freaking Zod. I absolutely loved it. All of it.

So yeah, my expectations for Superman III were insane. Sure, I was concerned when I first heard about the casting of Richard Pryor. I was a huge Richard Pryor fan at the time (and still am). He ranks alongside George Carlin as my favorite comedian of all time. But he is a comedian. And I did not want to see the franchise slip into parody. I love humor. But the story has to be real and consequential. So, yeah, I had concerns.

But after reading back to back issues of Starlog magazine, in which the screenwriters and producers assured me this was a serious, meaningful, and outstanding Superman story, my fears were quelled. I was ready to roll.

So I treated myself to a large box of M&Ms, did the “walk” (an 80s musclehead thing) in my tight Superman t-shirt, marched to the front of the theater, and took a seat on the left aisle at the third row.

Then, the movie started, and my heart sank.

The opening credits lazily rolled amid a slapstick urban sidewalk set piece thing that seemed like something out of another movie—one without the word Superman in the title.

Where was the bold majestic opening credit sequence I had come to expect from the franchise? And where the hell was John William’s goose bump-inducing march? His classic theme happens to be my favorite William’s march and here it is barely hinted at.

The movie had hardly begun and already I was aghast.

What followed only added fuel to the raging fire of crushing disappointment cascading within me.

A computer program? A hammy corporate CEO? Small town drama? It all seemed so pedestrian. So beneath the Man of Steel. This is supposed to be a substitute for Zod, epic flying battles above the city, and a fairytale romance at Niagara Falls and the Fortress of solitude. Really?

I left the theater pissed off, gave the film one star (for Christopher Reeve, or it would have been no stars), and declared it the worst film of that year, or any year for that matter.

Then the years passed. Lots of things happened, including Zack Snyder and Man of Steel (2013) and Justice League (2017). Superman III’s reputation ever so gradually began to improve. The movie was even paid homage to in the cult comedy Office Space (1999) and ripped off/paid homage to in an episode of TV’s Supergirl (“Falling” season 1x16)

Then, one day, in passing, I caught a viewing of Superman III on the SyFy Channel. And it intrigued me. Several weeks later, I picked it up on DVD and gave it a fresh look. And you know what? I kind of liked it. I even liked the opening slapstick sequence and found it to be quite inventive.

Sure, all the problems are still there. The story is pedestrian, and a huge come down from the glorious high adventure of Superman II. And the whole dissing of Lois Lane thing really is troublesome. But now, after being subjugated to Zack Snyder’s God awful and just plain wrong interpretation of the Superman myth, Superman III somehow feels refreshing and has a lot to offer.

To paraphrase a character from the above mentioned Office Space, Superman III is now an underrated movie.

Richard Pryor is just fine. His usual charming self. He really shines in the flying sequence and in all the scenes he shares with Superman. Annette O'Toole is beautiful and warm as always. The romance and small town stuff I hated so much in this film back in 1983 I now kind of like.

I have grown warm to Robert Vaughn’s Ross Webster. He’s certainly not Zod or even Lex Luhor, but I now find his arrogant, hammy William F. Buckley take on the villain amusing. He is an interesting adversary for the Man of Steel.

Then there is Christopher Reeve.

Christopher Reeve is a real stalwart to the franchise. He is a stud. Here, he is awesome as always, doing his best to carry the movie, and dammit, he pulls it off.

I mean, has there ever been an actor who just seemed born to play a character to this extent?

Only two others come close. Melissa Benoist as Supergirl, and Chris Evans as Captain America. Although in Melissa’s case I could make just as strong an argument for the incomparable Helen Slater as Supergirl in 1984.

But in the case of Superman, no other actor comes anywhere within the same universe as Christopher Reeve.

Not Tom Welling. Certainly not Dean Cain (blah). Not Brandon Ruth. Not Tyler Hoechlin (my God he is dwarfed by Melissa in those scenes on the TV show, both physically and charisma wise). Not even the overly muscled Henry Caville, whom I really like.

As to Henry—hey, as referenced above, I’m a bit of a musclehead and like my heroes jacked. But Superman should not look like he just stepped out of Gold’s Gym on his way to the Mr. Olympia pre-judging. While I’m on the subject of the physical, all the actors above are barely above six feet, except Brandon Ruth (listed at 6’2” but looks taller on screen), and he has the opposite problem of Henry Caville. He needs more muscle. Christopher Reeve on the other hand, at 6’4’’ and a lean, muscular 225 lbs., is just absolutely physically perfect to portray the Man of Steel.

Christopher Reeve IS Superman. Plain and simple. And every other version of the character has failed in part because the actor portraying Superman was not Christopher Reeve. Reeve is so good, he and he alone almost makes the wretched unwatchable Superman IV watchable. Almost.

Back to Superman III.

I have also come to love the music of Superman III. After listening to the new, remastered, special edition 2-CD soundtrack of the film and re-watching the movie, I now realize that Ken Thorne’s reworking of the original John William’s material is quite well done and far more omnipresent in the movie than I remembered. And the Giorgio Moroder tracks are amazing, especially the haunting love theme, very reminiscent of his love theme from Flashdance, another summer of ‘83 movie. Moroder’s synth’s give the movie a nice, fresh contemporary feel, ala 1983.

Hey, it’s a far cry from the first two, but Superman III is refreshing fun compared to the dour Man of Steel and Justice League.